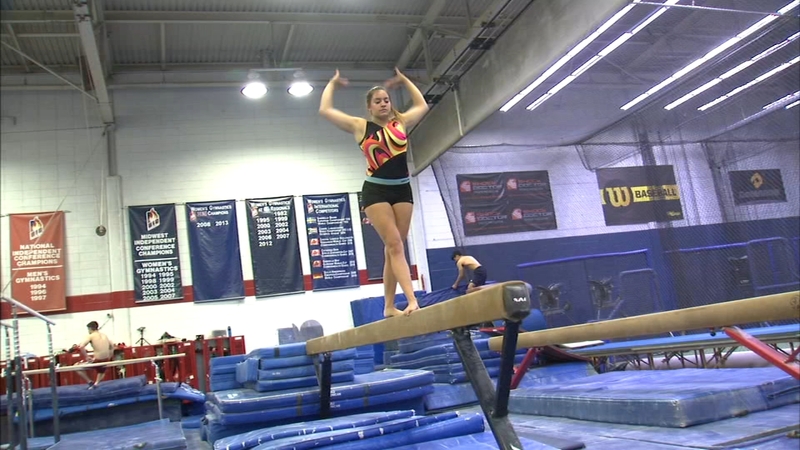 CHICAGO (WLS) -- The University of Illinois at Chicago announced it will drop its gymnastics program at the end of the 2018-2019 season, leaving dozens of student-athletes disappointed and trying to figure out what to do next after a dream they've worked for their entire lives is now up in the air.

Many of the students were supposed to report to class at 8 a.m. Friday, but instead were called to a meeting with the UIC athletic director where they learned their program would be cut.

"I didn't have words at first. I was totally... we were all kind of shocked, is the main word to use," said Alli Broad, a senior on the UIC women's gymnastics team.

"I've been doing gymnastics since I was 1 so all that work, down the drain," said Paul Burney, a freshman member of the UIC men's gymnastics team.

Burney, who has trained since he was a toddler, was recruited to come to UIC from California. He had been on campus for nine days when he got the news.

"I had to take four summer school classes and get A's in every single one and I got that done so I can be here and all just to find out that our program is getting cut," he said. "I sacrificed so much and come all the way out here for this reason, to do gymnastics, just to hear that I came here for, it will be one year."

Asad Jooma, a junior on the team, had just come back after competing in the Asian Games only to find out that the team he worked so hard to be on wouldn't exist next year.

Jooma is uncertain on whether he'll remain at UIC.

"It's already a huge accomplishment to be here in the first place but to think that transferring is an option or to think that that's easy is not only an understatement but downright false," he said.

The athletic department said in a press release announcing the decision Friday that the change will "'right-size' the department for long-term sustained success."

"This is the most difficult decision I have had to make in my career as an athletic administrator," Garrett Klassy, UIC's director of athletics, said in the statement. "I know that it impacts many people who have invested much of their lives into UIC gymnastics and our entire athletic department. However, this was a move toward progress that needed to be taken."

According to Charley Nelson, head coach of the men's gymnastics team, the athletic department told the team that the decision was made due to budget reasons, a lack of resources and a lack of interest.

"Not quite sure about resources or lack of interest but from where I sit, there's the resources we need and there's plenty of interest," Nelson said.

"It's an insult and it's ridiculous that 'disinterest' is the world that they used," Jooma said.

Budding local gymnasts who would be interested in pursuing the sport may not be able to, as there will be no collegiate-level gymnastics teams left in Chicago.

"The gymnastics community here is really awesome at bringing kids from the city to our meet to our camps, so it would be a really big loss to the city if our program were to be cut," she said.

Nelson said he and his students are prepared to fight back.

"I consider this a mistake by the university," he said. "And we all make mistakes but when you've realized you've made a mistake you need to make a correction on it."

"They've only scratched the surface," said Jooma. "They told us we weren't going to be here, they don't know what's going to hit them."