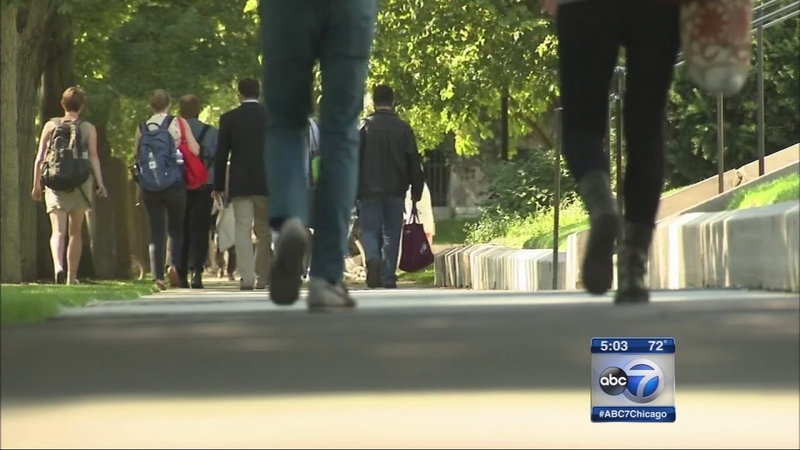 CHICAGO (WLS) -- A list was circulated on a Chicago college campus accusing some students of committing sex crimes. The list was posted online and in campus bathrooms, and accuses a dozen students at the University of Chicago.

The publication of the list coincides with the beginning of the fall semester, which begins on Monday. It is also, according to some statistics, the time of year when the most rapes occur on college campuses nationwide.

Published over the weekend on the social media website Tumblr, it is dubbed the "Hyde Park list" and it names six current and former University of Chicago students, accusing them of sex crimes against women. The list included the men's graduation years and labels them as "code red" or "code orange." It's causing a lot of buzz on campus, but not necessarily in favor of it.

"I think it's important to respect the victims and the alleged victims and to have them feel like they can talk about it, but i don't think it's an appropriate response in that medium," said Sarah Larson, a University of Chicago student.

"There are resources, especially here on campus that are very well equipped to deal with accusations of this sort, so i don't think social media is the smartest route to go to if you do have a problem with sexual assault," said Jenny Young, University of Chicago student.

As often is the case on Tumblr the publisher is anonymous and the information is not verified. Kent law professor richard warner deals with issues of privacy and computers.

"If the claims are false, it's almost certainly defamation. Legally speaking, if it's true they have a right to say it, a free speech right to say it and the information may be useful," said Richard Warner, IIT Chicago -Kent College of Law.

According to victim's advocates, rape on college campuses remains one of the most under-reported crimes. One which, according to some studies, affects primarily freshman students during their first semester in college.

University officials had no comment regarding the anonymous web posting but said that: "The University of Chicago has a particular commitment to preventing and addressing sexual misconduct, unlawful harassment and discrimination."

They also went on to list the programs and resources that exist on campus to deal with these issues.

Tumblr took the list down Monday night after less than two days online. However, Tumblr and other social media sites are not liable for any content posted by its users.