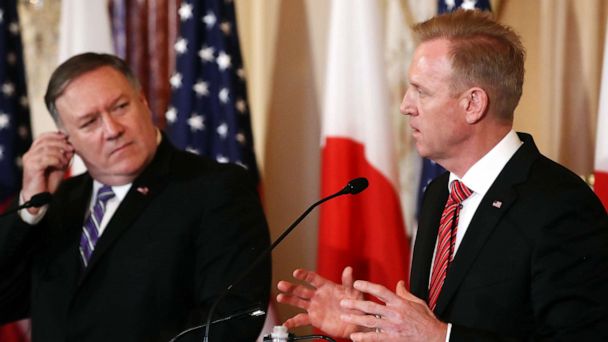 U.S. intelligence now believes that Iran is behind the attacks against commercial vessels off the coast of the United Arab Emirates, a U.S. official told ABC News.

The new assessment, directly blaming Iran's Islamic Revolutionary Guard Corps comes as senior Trump administration officials will brief members of Congress about -- what they call -- a heightened threat from Iran and several U.S. actions in response, including military deployments to the region and the ordered departure of non-emergency U.S. diplomats from Iraq.

The movement of a U.S. aircraft carrier and B-52 bombers to the Middle East have been an effective deterrent against Iran, acting Defense Secretary Patrick Shanahan said Tuesday, forcing the government to "recalculate" and "put on hold the potential for attacks on Americans" in the Middle East.

"That doesn't mean the threats that we previously identified have gone away," Shanahan added.

The acting defense chief will join Secretary of State Mike Pompeo and chairman of the Joint Chiefs of Staff Gen. Joseph Dunford on Capitol Hill Tuesday afternoon to brief members of Congress on the heightened tensions with Iran, although Democrats are already crying foul over the administration's intelligence assessment and some of their actions.

The latest assessment is that Iran's elite IRGC placed explosive charges at the waterline on four oil tankers that were damaged last week, said a U.S. official. The vessels -- two of which belonged to Saudi Arabia, one to the United Arab Emirates and one to Norway -- had holes 5 to 10 feet wide in their hulls, the official said, after reportedly being attacked at the mouth of the Persian Gulf.

"It's quite possible that Iran was behind these," Pompeo said in an interview Tuesday, but added that the U.S. hasn't "formed a definitive conclusion that we can speak about publicly."

Another piece of intelligence that led the U.S. to perceive a new Iranian threat to U.S. Naval forces was overhead imagery that showed cruise missiles placed atop small Iranian boats known as "dhows," it was believed they could be used against ships or land targets. But according to the U.S. official, last week those missiles were removed from two dhows that had been monitored by U.S. intelligence.

Shanahan said while "there were attacks" -- an apparent reference to the vessel incidents -- the recent U.S. military moves had prevented any strike on Americans, at least so far.

"I think our steps were very prudent," he told reporters outside the Pentagon. "We've put on hold the potential for attacks on Americans. That's what's extremely important."

"We're in a period where the threat remains high and our job is to make sure that there is no miscalculation by the Iranians. That's the most important thing we can do as the department, is avoid miscalculation and then control escalation. Our posture is for deterrence," he added.

The new developments will likely be part of Shanahan, Pompeo, and Dunford's briefing to Congress Tuesday as they try to tackle skepticism among some members of Congress about the credibility of U.S. intelligence that led to the military movements and ordered departure of non-emergency personnel from the U.S. Embassy in Baghdad and consulate in Erbil.

"Part of today will be to give credible information that will address that," said Shanahan.

But Pompeo struck a stronger tone, calling on lawmakers of both parties "to be united" in responding to Iran and "very supportive of this administration when we take acts that are consistent with protecting Americans."

Some members of Congress have said that the Trump administration is spinning U.S. intelligence to paint a picture of a more dire threat from Iran.

"I'm listening to Republicans twist the Iran intel to make it sound like Iran is taking unprovoked, offensive measures against the U.S. and our allies. Like it just came out of nowhere. I've read the intel too. And let me be clear -- that's not what the intel says," tweeted Sen. Chris Murphy, D-Conn., on Monday.