With earlier US Census 2020 deadline, community organizers work hard to get immigrant populations like Little Village, Back of the Yards counted 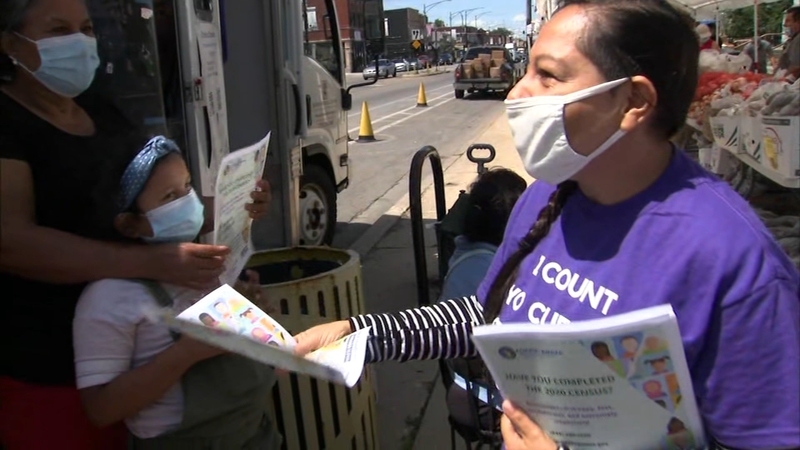 With earlier US Census 2020 deadline, community organizers work hard to get immigrant populations like Little Village, Back of the Yards counted

CHICAGO (WLS) -- The U.S. Census Bureau is wrapping up its count one month early.

Americans in Chicago and across the country need to be tallied by Sept. 30.

Census results affect how much funding and representation places get.

Door-to-door canvassing, passing out flyers at church food giveaways and filling out forms online while people are in line mark Census Action Week in Cook County.

Community groups and county officials are concentrating their efforts in neighborhoods with low participation, like Chicago Lawn on the Southwest Side.

"As a whole as a community, we are still low, so we are trying one last push before the deadline," said Mayra Sarabia with Southwest Organizing Project.

The U.S. Census deadline has been moved up. Originally Oct. 31, the U.S. Census Bureau announced it will end the count on Sept. 30.

"We already had so many barriers to get a full and accurate count here in Cook County; we know historically these are areas that have performed low anyways," Cook County Commissioner Alma Anaya said.

Anaya said areas with big immigrant populations need all the time they can get.

"My district as a whole only has 43% again, compared to the state that is almost 70%," she said. "We can see the huge difference."

And some neighborhoods are much lower than 43%. Little Village's and Back of the Yards' census participation is in the 30s. Anaya said there is a direct correlation between high numbers of COVID-19 cases and census response.

"A questionnaire is not something they are paying attention to at this moment," she said.