WLS
By Leah Hope and Alexis McAdams
CHICAGO (WLS) -- Jason Van Dyke, the former Chicago police officer who shot and killed Laquan McDonald has been beaten in prison, and his wife is demanding answers.

Jason's wife, Tiffany, says that he was assaulted in his cell by more than one person after he was placed in the general population at a federal prison in Connecticut. Van Dyke's attorneys said the former officer was attacked on February 7.

Tiffany Van Dyke says she wants answers after her husband was beaten while serving his sentence for the shooting of Laquan McDonald.

Van Dyke had injuries to his head and face -- which the Federal Bureau of Prisons characterized as "minor" -- and is now in lockdown 23 hours a day, his attorneys said. He is not allowed to have any visitors nor write emails or make phone calls in this isolated area of the prison.

The BOP declined to disclose any further information about the incident citing privacy concerns.

Attorneys for Van Dyke said they were alerted to the attack through a confidential phone call by someone who works at the prison.

"Immediately upon arrival Jason was placed into general population, as if he was led like a lamb to the slaughter," said Tammy Wendt, one of Van Dyke's attorneys.

At a news conference Thursday morning, Tiffany Van Dyke said she has not been able to talk to her husband since his sentencing and pleaded for his safety. She said she did not even know he was taken to a federal facility until Wednesday.

"He cannot stand up for himself and fight anymore. That is what I'm here for," she said through tears.

Van Dyke's family said they are all petrified and fear for Jason's life. His wife said the 40-year-old former officer just wants to serve his sentence and does not want any trouble.

Van Dyke was sentenced last month to nearly seven years in prison after being convicted in connection with the fatal shooting of Laquan McDonald. He was being held at the Rock Island County Jail in the northwestern part of the state, but according to the Federal Bureau of Prisons he was recently moved to a low security correctional facility in Danbury, Connecticut, where the assault took place.

Illinois Department of Corrections officials said Van Dyke was transferred out of IDOC custody under the terms of the Federal Intergovernmental Agreement. The department said it does not discuss details of transfers under this agreement.

"This is a gigantic race issue," she said. "They put my husband in a setting to be harmed because of the fact that he was a white man who harmed a black gentleman in the line of duty."

It's unclear why he was transferred to the Connecticut facility. It is also unclear if the inmates who assaulted him knew he was an ex-police officer.

A spokesman for the Fraternal Order of Police said, "We are deeply concerned about Jason's safety and we do not understand why the IDOC made the decision that led to this. We expect authorities to take the necessary steps to protect him and will not stop until we feel that they have done so."

William Calloway, one of several activists who have watched the case closely, called Jason Van Dyke a violent criminal and questioned why he was moved out of state.

"He deserves to be not only on a cell block with other offenders of his type, like any other inmate should be, but he should be in the Illinois Department of Corrections serving out the remainder of his time," Calloway said.

Recently, Illinois Attorney General Kwame Raoul and the special prosecutor Joseph McMahon, who won the convictions against Van Dyke, asked the Illinois Supreme Court to review the prison sentence he had been handed. They said they believe Cook County Judge Vincent Gaughan improperly applied the law in his sentencing. 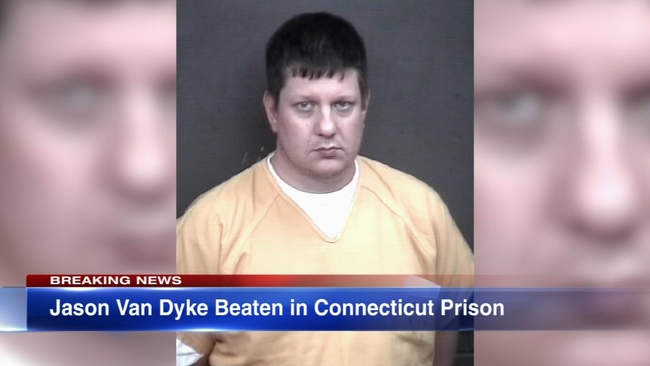