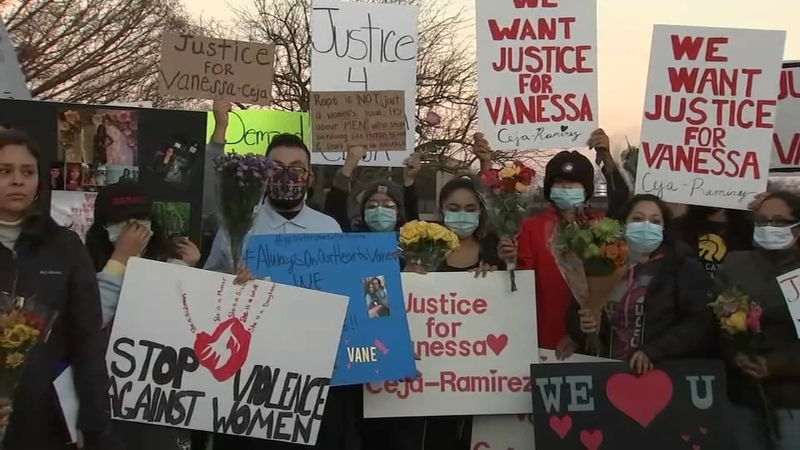 MIDLOTHIAN, Ill. (WLS) -- The reward for information leading to an arrest in the murder of a 22-year-old Harvey woman has increased to $10,000.

Vanessa Ceja-Ramirez was strangled before her body was found last week in a Midlothian forest preserve.

Her family was in tears as they called for justice late Thursday afternoon. Carolina Abrams shared a message to her cousin's killer.

"You are a coward, a lowlife and truly are the scum of the earth for what you have done," Abrams said. "You have no place in society."

Despite the pain over their loss, Ceja-Ramirez's family remains determined to find whomever is responsible for her murder.

"Vanessa Ceja-Ramirez did not deserve any of what happened to her," Abrams said.

Standing in the last place this 22-year-old Harvey woman was seen alive, her family shared what her killer took away from them.

Friends and supporters held signs that read "Justice for Vanessa" as her family announced an increased reward for any leads in her case.

"Anyone out there no matter how small think it was, a sound, a voice, something-call," urged Midlothian Mayor Gary L'Heureux.

"It was brutal and it was vicious," crisis responder Andrew Holmes said.