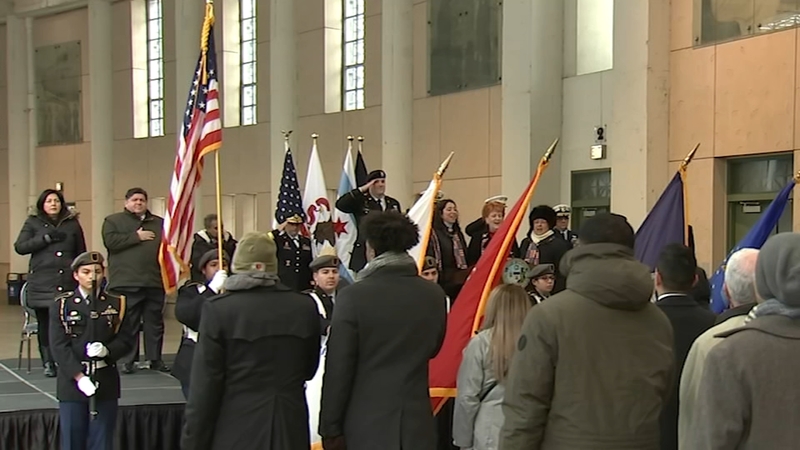 CHICAGO (WLS) -- Hundreds of people paused to remember the veterans who served our country and honored their sacrifice during a cold and damp ceremony at Soldier Field Monday morning.

U.S. Army Vietnam veteran James Hobson braved the weather to honor his fellow service members. He said he's not looking to be honored, he's focused on fallen soldiers and their family.

Veteran Bob Weigant, 94, stood and saluted during the wreath-laying at the Spirit of the American Doughboy statue, which honors World War I veterans.

"I was in North Africa to start with that was our first engagement, I guess, with Eisenhower, and then with Patton, we were in Sicily," Weagant recalled.

Weagant reflected on his time served in the U.S. Marines during World War II.

"We were on our way to invade Japan, and the H bomb dropped, which probably saved our lives," Weagant said.

"When our veterans complete their service it becomes the shared duty of all Americans to serve our veterans," Pritzker said.

Mayor Lightfoot told the audience veterans deserve to be honored every day.

"We may honor our veterans today, but our true service to them is in what we do for them in our city, in our country, every single day," Lightfoot said.

Weagant said he hopes he has a few more Veterans Day celebrations ahead of him.