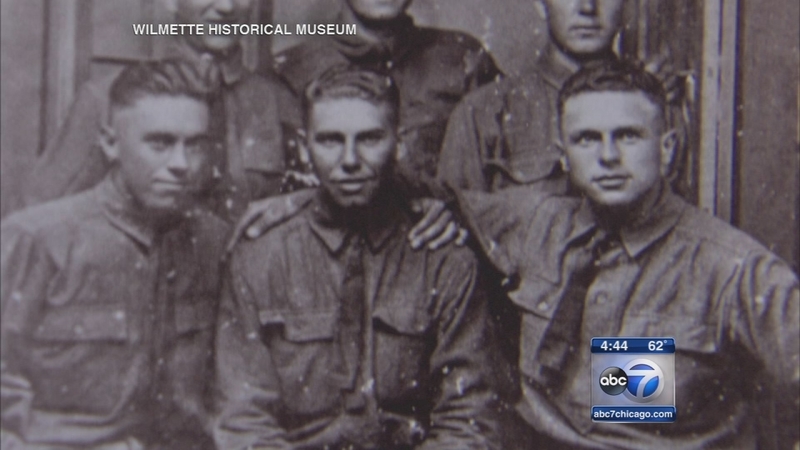 WILMETTE, Ill. (WLS) -- A Veterans Day commemoration in north suburban Wilmette has been going on quietly and continuously now for 94 years.

At the Wilmette Historical Museum, they have a long memory about local men who served in World War I. Hundreds of them volunteered to go "over there" in 1918. The vast majority came back, but twelve of them never saw their hometown again.

Museum curator Patrick Leary has gotten to know the fallen soldiers through their photographs.

"This is Lewis Bruch. It's a particularly sad story. He was shot down over the lines the day before the war ended. November 10th, 1918," Leary said.

At the north end of a large soccer field Wilmette's Gillson Park, a grove of trees stands tall in salute of Bruch and the other fallen soldiers.

"In 1921, just a few years after World War One ended, a local group decided to commemorate the fallen soldiers of Wilmette by planting a grove of Norway Maples," Leary said.

Originally there were 13 trees that represented the 12 GIs who died and Father Vattmann, an Army chaplain who survived and was beloved by the troops.

"It's a traditional way of honoring the dead to honor the dead with something living and growing," Leary said.

Them memorial has been growing for 94 years.

"Very few people, even people who have lived in Wilmette for a long time, know about this lovely little grove here," Leary said.