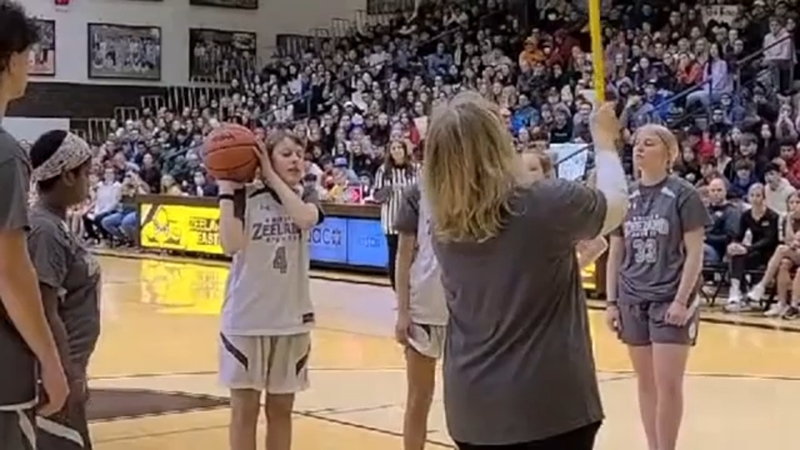 GRAND RAPIDS, Mich. -- A blind 11th grader never imagined she'd create this much excitement with her basketball skills. But with one fell swoop, she's soaking it all up.

The Michigan high schooler talked about the shot and the program that made it happen.

After a couple of taps on the backboard, Jules Hoogland took her shot.

The crowd of students from Zeeland East and West erupt in excitement, WXMI reported.

"I was like, everyone's staring me better. Can't see them staring at me, so this is good," Hoogland said.

Because Hoogland is blind, she has help on the hardwood.

The girl in the video behind her is Ally Guffey.

"She's my eyes on the court because I don't have my cane, so I have to put my trust in her to make sure she doesn't let me get hit by balls, and she guides me in the right direction," Hoogland said.

The two are inseparable on and off the court.

"I just make sure she is all lined up," Guffey said. "I had never met anyone who was blind before, so I knew nothing. She put a lot of trust in me. And it just -- we had a lot of trial and error. But we have come very, very far. And now we're in a class together for the past two years."

They knew each other back in middle school, but the "Unified" sports program made the two grow together, almost like sisters.

This program started several years ago as a chance to make friends.

"To watch the culture shift of our school community, really made a difference," said Unified coach, Jessie Steel. "And just to be able to watch how that's continued to grow: students be accepted, students be shown that they matter and given a chance to really to prove that to the school body."

This is Guffey's senior year, but she's already making plans to see Hoogland back out on the court.

"I think it's humbling when you realize that those goals are reality, and that those are the relationships that now exist in our campus, in our community, said fellow Unified coach, Nate Vande Guchte.