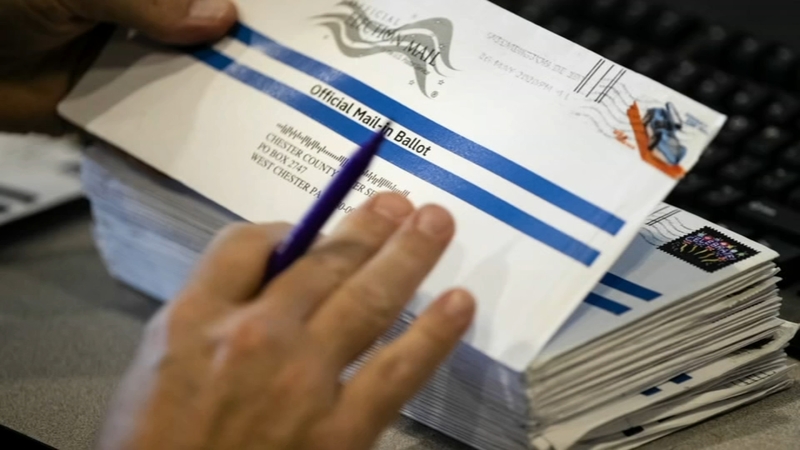 RIVER FOREST, Ill. (WLS) -- The ABC7 I-Team spoke with a River Forest woman who said she applied for a mail-in ballot months ago, but still hasn't received it.

Annette Szczesny said she didn't feel comfortable voting in person this year due to COVID-19. So in July, she applied for a mail-in ballot through the Cook County Clerk's Office. Nearly three months later, she's still waiting for it to arrive at her home.

Szczesny said she tracked her ballot using a link sent by the clerk's office. Based on the tracking information, Szczesny said her ballot appears to have been at a postal facility in Carol Stream since October 1.

Szczesny said her attempts to reach someone at the clerk's office and the U.S. Postal Service have been unsuccessful.

"It's crushing. Yes, it's crushing and that's why I called Channel 7," Szczesny said. "And I was very surprised and pleased, Samantha, that you returned my call."

In a statement to the ABC7 I-Team, the U.S. Postal Service said, in part: "USPS continues to process an historic volume of political and election mail this season. The 630,000 women and men of the Postal Service are committed to our longstanding role in the electoral process, and we are actively working to deliver in this election season."

But as for ballot tracking, the postal service referred questions to the Cook County Clerk's Office.

"There was a period where phone communication was difficult," said Edmund Michalowski, Cook County's Deputy Clerk of Elections.

Michalowski said they've added 20 additional workers and it's improved phone communication with voters. For vote by mail, they've had success with the U.S. Postal Service. But he said in Szczesny's case, she could cast a "provisional ballot."

Here's how it works: voters who still haven't received their mail-in ballot can go to their local polling place, explain their situation and request a provisional ballot.

Szczesny said she reluctantly went to her local polling site and cast a provisional ballot.

"There are going to be issues like this and Annette made the right choice to go and vote provisionally because that vote will definitely count," Michalowski said.

Szczesny said she's glad she had a plan B, but isn't happy with the process.

"Stood in a very lengthy line in Oak Park in order to cast a provisional ballot," she said. "I will not use a mail-in ballot again. This has left a really bad taste in my mouth."

The Cook County Clerk's Office said that for voters who requested a mail-in ballot but haven't received it, or changed their mind about voting by mail, can cast a provisional ballot in person before or on Election Day.

USPS Full Statement
With a record number of people across the country voting by mail, the U.S. Postal Service's number one priority between now and the November election is the secure, timely delivery of the nation's Election Mail.
USPS continues to process an historic volume of political and election mail this season. The 630,000 women and men of the Postal Service are committed to our longstanding role in the electoral process, and we are actively working to deliver in this election season.
Regarding ballot tracking, we request that all questions regarding Cook County's ballot tracking website and practices be directed to the Cook County Clerk's office.