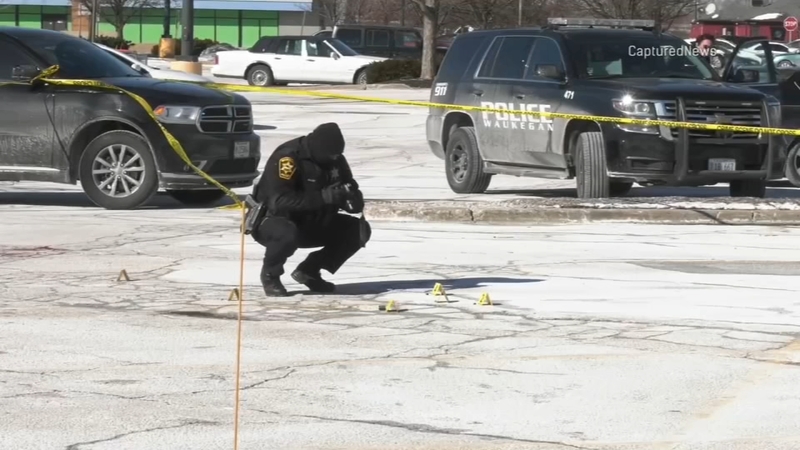 WAUKEGAN, Ill. (WLS) -- Two men in their 20s were shot Saturday at a Walmart Super Center parking lot in north suburban Waukegan, according to police.

Both police and fire responded to the store at 3900 Fountain Square just at around 1:30 p.m.

Video of the scene showed the parking lot littered with shell casings after police said two groups in separate vehicles met up outside the Walmart when an argument ensued.

"This was a very violent act," said Waukegan Deputy Chief Joe Florip. " "We're not sure if the vehicles were shooting at each other, or if there were just shootings from one vehicle."

But when officers first arrived on scene, no shooting victims were found.

Police said shots were fired from the two vehicles that then sped away from the scene. One of them, an SUV, caused a multi-vehicle accident at the intersection of Westwaukee and Washington, about two miles from the Walmart. Police found a passenger inside the SUV shot multiple times.

No one was hurt in the crash but the driver of the SUV was taken into custody in connection to the shooting.

"We're not prepared to call them a suspect yet. Again, this is a very fluid investigation, and it is open and active," Florip said.

Police said there's no threat to the community regarding this case but some residents said they're still shaken up.

"Especially for kids to have to witness something like that, I'd been terrified," said Waukegan resident Teaqua Matsey.

Concern still looms over some shoppers about returning to this Walmart.

"That could've been anybody's anybody. It didn't have to be, necessarily, the people they were going after, and that's what is the scary part. It's always that way. Most of the time, the shooters don't even get who they really want," said Matsey.

According to a Walmart spokesperson confirmed no associates were involved.