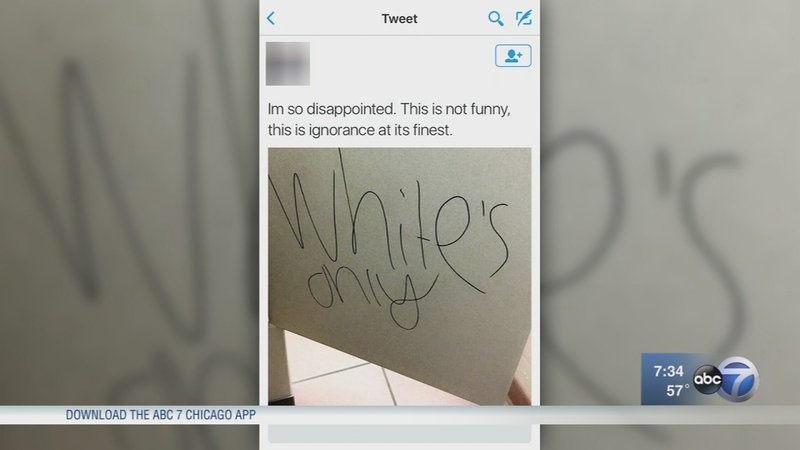 GURNEE, Ill. (WLS) -- A disturbing message was found inside a north suburban Gurnee high school. The school is now trying to figure out who wrote the racist writing on a bathroom stall.

Students at Warren Township High School showed their outrage after the racist graffiti was found.

"This can't happen," Dorian Sauls, a student, said. "We need to be an example being one of the most diverse schools. This isn't OK."

"There is no supremacy or anything. We are all one," Brittney Galuska, a student, said.

Pictures of the graffiti popped up onto social media Wednesday night and showed the words "whites only" scrawled on a stall door on a first floor girls' bathroom at the campus juniors and seniors attended. Nothing was reported at the school for lower classmen.

"My mom first heard about it then everybody in the family started texting me if everything was OK. I told them everything was OK, but they still came and got me," Danasia Watkins, a student, said.

The discovery not only prompted concerns about student safety, but also an investigation by local officials who at this point don't know who's responsible for the offensive message.

The school officials notified parents by email about the incident.

Warren Township High School has a total student body of roughly 4,200, of which 30 percent Latino, 10 percent African American and five percent Asian.
"We have a really great student body who support one another. When we get racial slurs or anything hateful, we take it seriously," John Ahlgrim, superintendent, said.

Cellphone video captured the school's principal talking to those students who staged a sit-in in reaction to the vandalism. Some students blame the message on the results of the recent presidential election.

"I guess it all goes back to Trump's election. He's not even president yet and this is already happening," Stephanie Vega, a student, said.

Regardless of the reason, the students said they're not going to tolerate hate.

"Our school mirrors the population of Illinois. That is unacceptable. We are not standing for it today," Andrew Outten, a student, said.

While the school community said they are disappointed about the discovery of this message of hate, they said it's a good opportunity to talk about inclusion and not tolerating hate.

EMAIL SENT TO THE STUDENTS' PARENTS

Below is a follow up on the email which was sent home earlier in the day today regarding racially insensitive graffiti in washrooms.

Some students at our Almond Campus who were feeling very concerned organized a sit-in after 5th period today in our library hallway. During 6th period, Mr. Keeley used this as an opportunity to hold an impromptu student meeting and hear their concerns. Approximately 200 students participated. The Administration plans to follow up with groups of students and parents to further investigate these concerns.

Additionally, three "copycat" examples of the graffiti were also found on washroom stalls at our O'Plaine campus on Thursday. The graffiti was immediately removed and our Deans and the Gurnee Police are investigating these incidents as well.

We are asking parents to please communicate with their children on the critical role of tolerance and an appreciation of diversity in our lives. We also ask that you remind them to please report any information they have about inappropriate conduct to the school administration as soon as possible.