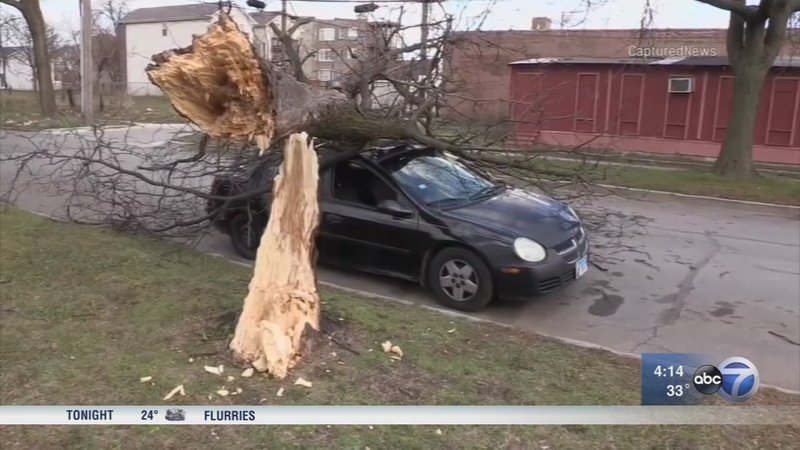 CHICAGO (WLS) -- Hold onto your hats! A Wind Advisory is in effect until 6 p.m. Tuesday in the Chicago area. Gusts of 40-55 miles per hour are expected.

The gusty winds broke a window in a high-rise along Lake Shore Drive near Grand Avenue Tuesday morning. Chicago's Department of Buildings said that the area remains closed off to vehicle and pedestrian traffic for safety reasons. While the broken window was discovered Tuesday morning, the contractor on site is waiting for winds to die down before it can be replaced.

Strong winds even sent a piece of aluminum siding crashing down on top of an ABC7 Eyewitness News live truck. No one was hurt.

Chopper 7 HD spotted a trampoline that blew away from a home in north suburban Lindenhurst. It landed next to a van near Sand Lake and South Beck roads.

Another trampoline flew from one yard to another in far northwest suburban Pingree Grove. The woman who owns the trampoline said the wind also took down portions of her family's fence. The trampoline is now broken and her kids were disappointed, but her husband was able to repair the fence.

A family's trampoline blew into their neighbor's yard and took down a portion of their fence in far northwest suburban Pingree Grove due to high winds.

The wind was so intense overnight, it appeared to blow a whole couch off a balcony and into the street in the 1700-block of South Michigan Avenue.

In south suburban Alsip, a gas station canopy collapsed. Esther Welch was inside her car at one of the pumps when it happened. Luckily, her car wasn't crushed.

"I heard a boom and the next thing I knew, I seen the canopy coming towards my car. So I ducked down, laid down on the seat," Welsh said. "I just thank God that the pumps didn't explode and it didn't crush me."

In the Chicago's Lakeview neighborhood, a few windows in the 3700-block of North Halsted Street shattered, sending glass into the street. No one was hurt.

In the city's West Loop, the wind took down a fence near West Randolph and North Aberdeen streets and lights shook near West Adams and South Des Plaines streets.

Construction sites have also been vulnerable to the high winds. Fabric was ripped off scaffolding at a site in the 2200-block of South Michigan Avenue in Chicago's South Loop. Those who live in high-rises heard the wind whistling and felt their buildings rattle.

The wind also ushered in cold temperatures Tuesday, as the mercury dropped from the mid-to-low 40s in the morning to the 30s in the afternoon. That's a huge change from Monday's highs in the 60s.

Ethylene Johnson wore extra layers as she waited for the bus in the South Loop.

"It's freezing. I mean, compared to yesterday, just the wind. It blasts around the corner. It's crazy," said Angie Cominos, who was covered in a thick, black, hooded coat.

RJ Bryant works as an outdoor security guard near West Roosevelt Road and South State Street. He fought the weather all morning.