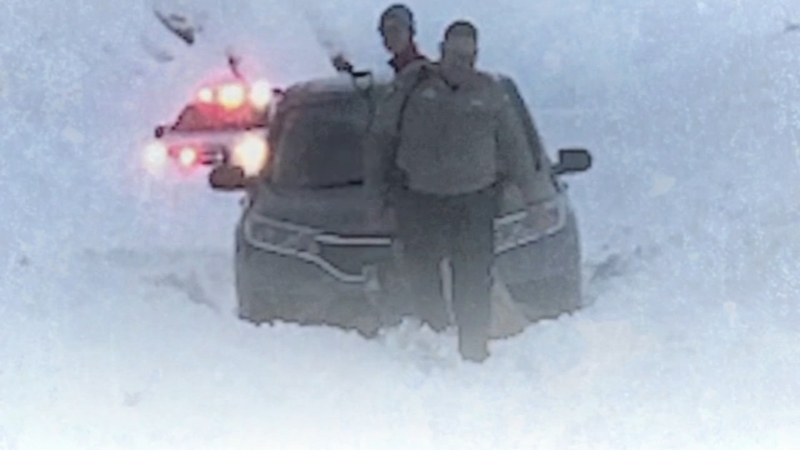 WEBER COUNTY, Utah -- A couple survived being trapped by not just one, but two avalanches while driving in Utah.

Avalanches can go from zero to 80 miles per hour in just five seconds. So far this year, one skier and two snowmobilers have died.

Erica and David Kennebeck were driving on a mountain road over the weekend when suddenly, more than five feet of snow plunged down onto their vehicle.

"There's been several small avalanches and there's a car, it's stuck between a couple of them," a caller told a Weber County 911 dispatcher.

Erica Kennebeck told KTVX it happened in a split-second. She thought it was blowing snow at first, but then all of a sudden there was a wall of snow against her door.

"It went through my head for a second. Maybe this how we are going to go. It's horrible to think about," Erica Kennebeck said.

"I thought, 'I might be able to get out of this.' Then I saw 40 and 50 feet in both directions - two bigger slides that we could not get out of," David Kennebeck said.

The couple managed to climb out the driver's side door and flag down help. A good Samaritan caught on the other side of the slide took them home.

"At first you think, 'What bad luck. We are the only car that got trapped in it.' But after the fact, we are like, 'How blessed we are that it wasn't worse?'" David Kennebeck said.

Weber County Roads Director Joe Hadley said the mountain road is heavily traveled and they see avalanches often. Since this is the case, he recommended drivers keep tire chains in their vehicles, read posted signs and use common sense.

"If you don't think it's safe, it's probably not safe," Hadley said.

Avalanches claim nearly 30 lives every year in the United States. Rescuers train to save victims in drills that simulate the hard, heavy snow. It can be tough to dig out and difficult to breathe.

Experts said anyone caught in their car during an avalanche should stay in the vehicle, call 911 and let help come to them. They should turn off the engine to prevent carbon monoxide buildup and honk their horn every ten minutes.