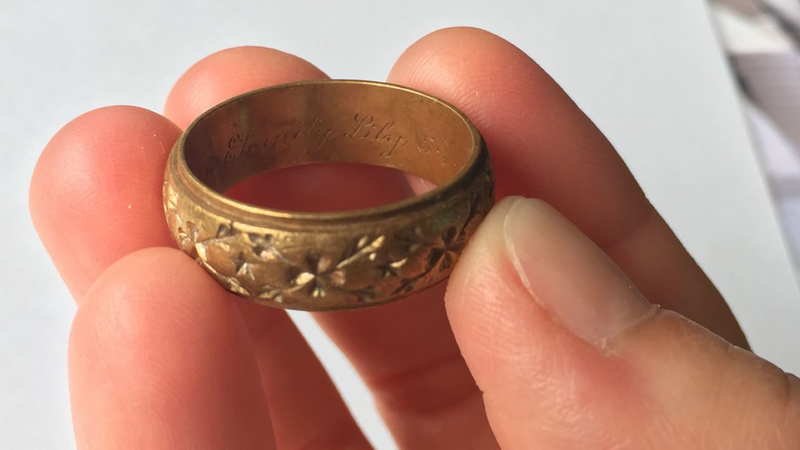 RICHMOND, Calif. -- You never know what you'll find walking along the beach. For one Bay Area man, the wedding ring he found sparked a national search for its owner.

Richard Grassetti has been coming to a stretch of shoreline just north of Keller Beach Park in Richmond since he was a little boy in the late 1950's. He spent many a day searching for crabs under rocks and picking through the sand looking for sea glass treasures.

"It's nice to see the crabs are still here," he marvels, as he picks up an odd-shaped rock and finds dozens of minuscule crustaceans scuttling for cover.

But it wasn't until four months ago, something special caught his eye.

"I leaned over to pick it up between the rocks and saw that it was a wedding ring."

Richard found this ring on the beach 🏖 in Richmond w/the inscription “From now to Eternity Lily 5-1-49”. Help find this ring 💍’s owner! pic.twitter.com/iBmWNpv4uW

Among the thousands, if not millions, of rocks that line the shore, he spotted the ring. Ornately designed, glistening in 14-carat gold, the man's ring bore an inscription uniting its owner to his mate for life.

So the ring sat. Not on a rock, but on Richard's kitchen counter for months -- until a friend visited him at home and picked it up.

"She was like, we need to find the owners of this. She stuck it on her Twitter."

RIchard is not the social media type, and was skeptical the Tweet would do anything. But that friend, Christina Toms, posted it on the social media platform on Tuesday, with a request for help.

"It's really blown up. And I think people are invested in it and hopefully we find to whom the ring belongs to," beamed Christina.