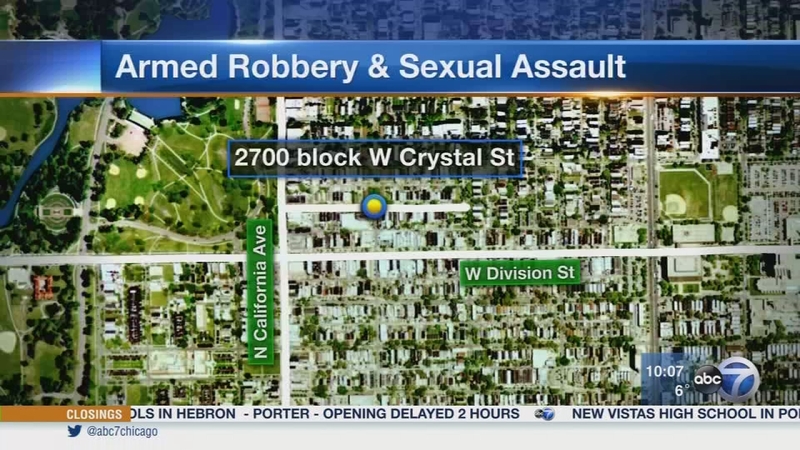 CHICAGO (WLS) -- A 23-year-old woman was sexually assaulted by a group of armed robbers in the Humboldt Park neighborhood Wednesday morning, police said.

The woman was with a 30-year-old man inside a car in the 2700-block of Crystal Street when they were approached by four men each armed with handguns at about 3:52 a.m., police said. The men pointed their guns at the victims and demanded property, police said.

Two of the men sexually assaulted the woman at gunpoint and one attempted to force her into their vehicle before shoving her into the ground, police said. The armed robbers then fled the scene in a small blue/gray four-door sedan, possibly an older model, police said.

One suspect is described by police as 18-19 years old, 5'4", 115 pounds with a "baby face" who was wearing a black jacket, gray sweater, dark jeans and tightened hooded sweatshirt.

A second suspect is described by police as 15-16 years old, 5'07" and 100 pounds, with a "baby face" and short shaved hair who was wearing a black jacket, beige pants and black dress shoes, similar to a school uniform.

A third suspect is described as approximately 18 and the fourth as between 18 to 21 years old, police said.

The crime took place just steps from a Chicago Boys and Girls Club and now neighbors are on alert. One young couple said they are moving at the end of the month.