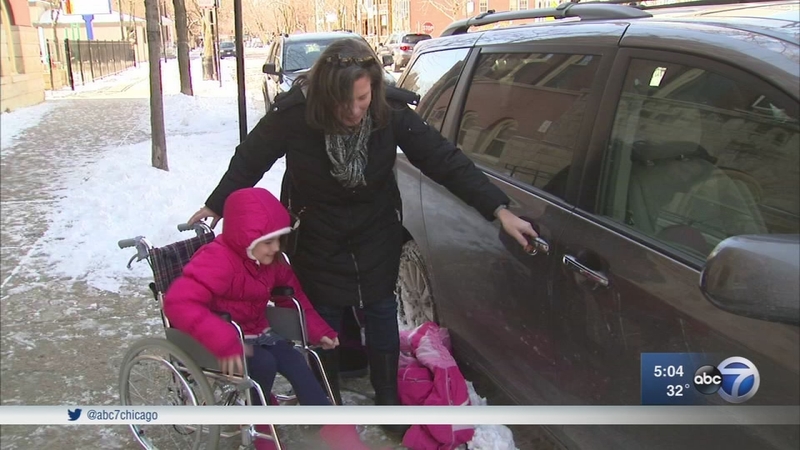 CHICAGO (WLS) -- The family of an 8-year-old Chicago student says their daughter's school is not wheelchair accessible.

The family asked Chicago Public Schools to make necessary changes to her school nearly two years ago, but they say so far, accessibility remains a challenge for their daughter.

After trying unsuccessfully to work with CPS over this issue, Karen Pillsbury and her daughter are filing a lawsuit against CPS CEO Forrest Claypool and the Board of Education.

The Pillsbury's hope legal action will help keep the 8-year-old in a school she has been attending since she was 3.

A ramp outside of the Bucktown magnet school is about all that is accessible to Grace Pillsbury. Over two years ago, the 8-year-old was diagnosed with a very rare genetic disorder called Gaucher's disease. It makes her bones extremely brittle.

"She is either in a wheelchair or a walker at this point, she doesn't get to run, to jump like other kids and that is tough on her emotionally," her mother Karen Pillsbury said.

Adding to the emotions is the fact that Drummond Montessori is in a very old building, one that is not accessible to students in wheelchairs. To reach upper floors, the 2nd grader must scoot up the stairs on her bottom.

"It made me feel uncomfortable, a lot of times my dress would get caught on the stair," Grace said.

Ever since Grace was diagnosed, her parents and Access Living Chicago have been trying to work out a solution with Chicago Public Schools.

"The American with Disabilities Act, they require full accessibility of a building, but we have offered to negotiate with them simply making modifications to allow the student to attend classes," said Charles Petroff, Access Living attorney.

Access Living and the Pillsbury family suggests a chair lift if a elevator is not possible. But they say CPS only offered to move Grace to a different school, but, Drummond is the only K-8 magnet montessori in the system. In addition, the school is two blocks from Grace's home and there is a sentimental connection: Grace's grandparents and great grandparents attended Drummond. Karen Pillsbury says they don't have a choice but to file a lawsuit against CPS.

"This is not just about my daughter, this is about all the kids in the system who are disabled and are being excluded from this great magnet school," Pillsbury said.

Petroff said the lawsuit was filed after CPS stopped responding to their requests to discuss the issue. A CPS spokesman says the district does not comment on pending litigation.