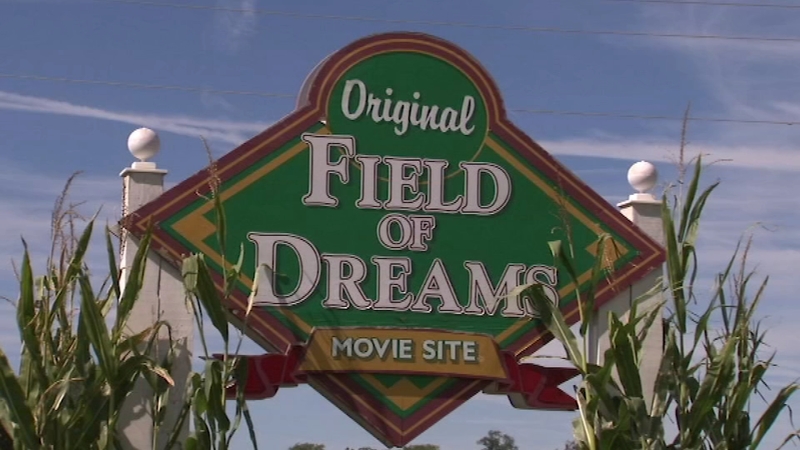 It is a magical place for baseball fans, and the field being carved out of corn is expected to be epic.

Outside Dyersville, Iowa, the "Field of Dreams" movie site will be hosting a major league game in August.

Some of the game's modern legends have played here - for charity and fun. But August 13 will bring the real deal.

"It's the buzz. The buzz is incredible. It's electric," said Roman Weinberg, operations director of Go The Distance Baseball. "It's just incredible to see that a movie site that's 30 years old can extract that much joy and excitement."

The Chicago White Sox will host the New York Yankees in a regular season game - the first major league game ever played in Iowa... or is it heaven?

"Right in center field there'll be a walkway through the corn of the original Field of Dreams, guiding them to the Field of Dreams II essentially," Weinberg said.

From above you can see that a lot of work has already been done. The new field will carry the dimensions of the original Comiskey Park. The right field fence will be clear, so the corn can be seen. A temporary 8,000-seat stadium will be built for the game.

Major League Baseball has not yet decided when or how a public ticket offering will take place, but big demand is beyond doubt.

"Tickets for the actual game will be hard to come by, but people will still come. As Terrance Mann said in the movie, 'People will most definitely come.,'" Weinberg said.

Dyersville Area Chamber of Commerce Executive Director Karla Thompson said, "Just dealing with the phone calls that are coming in and not having tickets right now, they still are taking time off and they are coming, regardless."

Nearby Dyersville figures its population of more than 4,000 will be multiplied by four, five, maybe more. Hotel rooms within an hour's radius are already booked. Locals are preparing for house guests just as they did for Moonlight Graham.

"It'll definitely put Dyersville on the map of Iowa. I mean there's more in Iowa than just cornfields," said Becca Miller, owner of Brew and Brew.

Dyersville has hosted big events before. While this may become the biggest, there is little doubt the town will be ready. After all, the mayor's name is Heavens.