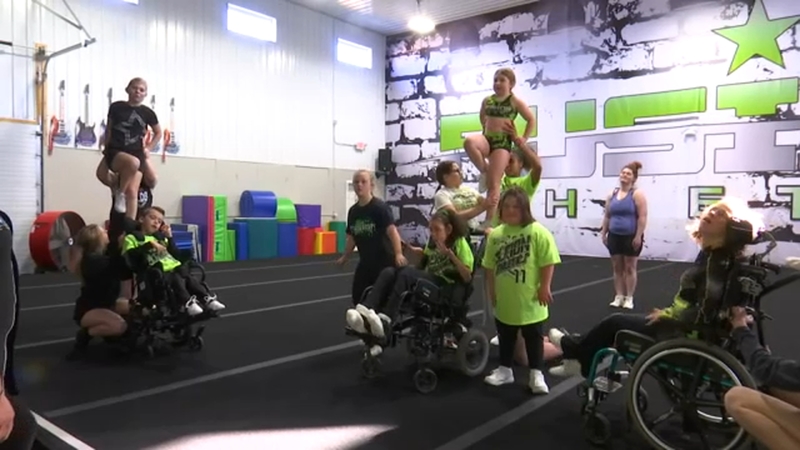 ASHWAUBENON, Wis. -- The countdown is on for a cheer squad in Wisconsin as they practice and prepare for a chance to show their talents to the world when they compete at the end of next month.

For this team of 12 cheerleaders with special needs, it's about so much more than the competition.

This special needs cheer team, Legacy, is the only competitive cheer abilities team in Wisconsin. Not to mention champions of their competitive division in 2021, which earned them a trip to Orlando, Florida.

"It was fun because I forgot what it was like to be on an airplane," said cheerleader, Zoe Shephard. "The funny thing was, my friend Tara, she was squeezing my hand so hard that after we got off I'm like, 'Do I even still have my hand?'"

"The Fusion Athletics all-star special-needs cheerleading team won this first-place trophy at last year's cheerleading worlds in Orlando, Florida. They're going back this year and coaches say it's going to be even more memorable considering there were COVID-19 restrictions and smaller gatherings last year," said Annie Krall.

"It is literally the highlight of my whole career. Last year when I got to watch them, I looked like a lunatic just crying the whole entire time that I missed my cue to unplug the iPad and stop the music because I was standing there crying. It is so much pride and joy to watch them find a place that they fit in. A home where they have friends that they are just regular kids and they get to showcase their talents," said Melissa Brauer, owner of Fusion Athletics.

The team of 12 includes cheerleaders with a range of abilities.

RELATED: Cheerleader with Down syndrome lets nothing stop her

While each brings something unique to the team, when they hit the floor and perform, coaches said they become a synchronized unit

"I like having friends," said cheerleader Alivia Laluzerne, when asked what is fun about the cheer team.
"We've also made a really big effort to involve the kids who we have who have wheelchairs. To make sure that they're involved just as much as anybody else," said head coach Jen McCargar. "So, we have a really unique way of stunting that really involves them so everyone partakes in it."