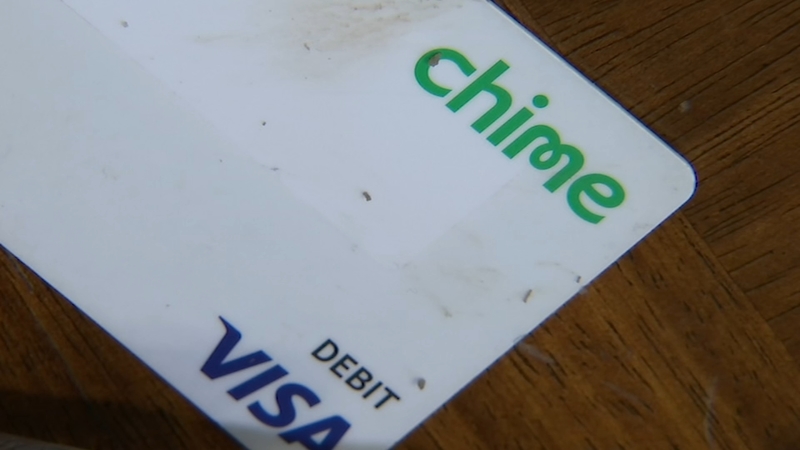 CHICAGO (WLS) -- Two local women turned to the I-Team after they said large amounts of cash were syphoned from their online bank accounts.

An estimated 5 million people use the online bank Chime. Two customers contacted the I-Team after noticing hundreds, even thousands of dollars disappeared.

"We get alerts every time we spend something and luckily I had the alert on, because it was sending me notifications, a bunch of notifications," said Price.

She said money was mysteriously moved from her savings to her checking, then the money was being spent rapidly at a grocery store in North Carolina.

Price said she disputed the transactions with Chime and filled out a police report, but was told that she may have to wait 45 days for an investigation.

"I'm calling them, I'm crying on the phone, I even left work. I felt violated," Price said.

North Lawndale resident Jasabella Clark is disputing a transfer of $1,400 from her Chime bank account to a different bank.

"I was trying to check my bank balance while I was on my way back home and I couldn't log in. I told the manager, I said that I didn't authorize that transfer, I can't even get into my account so that is just impossible," Clark said. "Then the manager escalated me up to a specialist, and the specialist just gave me a dispute form via email, and she told me to file a police report. So that's what I did."

Besides that police report, Clark filed a Chime bank affidavit form of "erroneous transfer" and complained via email. She also supplied the bank with screen shots from Lyft which she says shows she was in Country Club Hills at the time of the transfer. Clark said the bank told her the transfer came from a Chicago IP address which matches her residence.

However Clark points out she could have been hacked and said she does not know the person named "Jamari" to whom her money went.

Clark said she needs the money to pay rent.

"I needed money to pay bills," she added. "It's a bummer actually."

In documents Clark shared with us, Chime said the recipient was 19 minutes away from her and, based on its investigation, no error occurred.

"I was upset. I was clearly upset, I just felt like everything was rushed, I felt like I wasn't taken seriously," said Clark.

But later, in a response to the I-Team about her case, Chime said "...While we cannot disclose private information about our member's Chime account, please be assured we take matters like this very seriously and our team is currently investigating the situation."

Chime gave the I-Team a similar response about Price's case, saying it was investigating.

Price said that less than two days after the I-Team inquired, she received her $3,000 back.
As Clark did, you should have alerts and notifications sent to your phone about banking transactions and report suspicious transactions immediately.

To avoid Wi-Fi hacks to accounts you should make sure to only bank on Wi-Fi networks which are secured, with a strong password.

You can also report banking disputes to federal agencies by going to the following websites: