Worker, 22, dies after being trapped in 20-inch sewer pipe in Streamwood

WLS
By Will Jones and Evelyn Holmes
STREAMWOOD, Ill. (WLS) -- Brett Morrow, a 22-year-old man from north suburban Gurnee, died Wednesday after he got stuck in a 20-inch-wide sewer pipe about 20 feet underground in northwest suburban Streamwood.

Investigators from the Occupational Safety and Health Administration were on the scene Thursday morning, looking into what went wrong. Morrow had gone down a manhole Wednesday to install lining in a sanitary sewer under Park Boulevard near Parkside Circle.

Firefighters were called to the scene around 6:15 p.m. after his crew lost contact with him. When rescuers went underground to search for Morrow, they were only able to see his boots. Clark said throughout the rescue effort, Morrow was unresponsive.

"Just moving around and working in a space like that, one of the firefighters told me that he was literally shoulder-to-shoulder with the sides of that pipe," Streamwood Fire Chief Chris Clark said

Officials said firefighters could not reach him because "a large quantity of hardened lining material was blocking the pipe." They used saws to cut the blockage away, "little by little," and eventually cleared a path.

"It was bunched up and rigid, so they had to get in with saws to cut that fiberglass out of the way to allow them to access the victim," Clark said.

Several hours later, shortly after 10 p.m., crews reached Morrow about 20 feet north of the manhole and managed to pull Morrow out. He was pronounced dead at the scene at 10:32 p.m., authorities said. An autopsy is scheduled for Thursday.

Clark said confined space rescues don't happen that often. But when they do, the process is challenging.

"We haven't had an incident like that in Streamwood. They do train a lot on this type of a situation, but they are fairly rare. So it is definitely a challenge," Clark said.

Outside of work, Morrow loved sports. He played with the Kenosha Mammoths Rugby Football Club. Morrow's teammates said he played the game hard.

ABC7 Eyewitness News reached out to the construction company on site. They had no comment.

Crews had been working in the neighborhood over the last few weeks. There is no word yet on how the incident will affect the sewer project moving forward.
Report a correction or typo
Related topics:
streamwoodworker death
Copyright © 2020 WLS-TV. All Rights Reserved.
RELATED 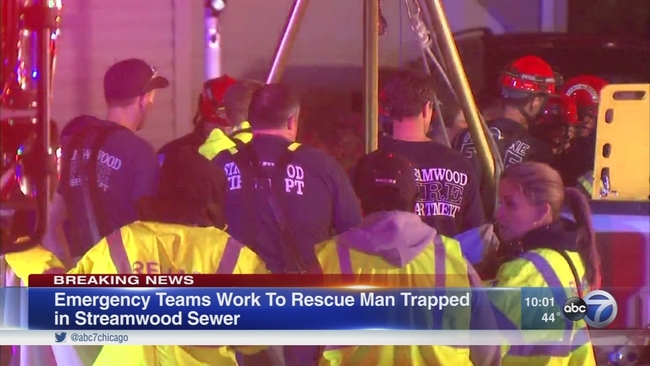