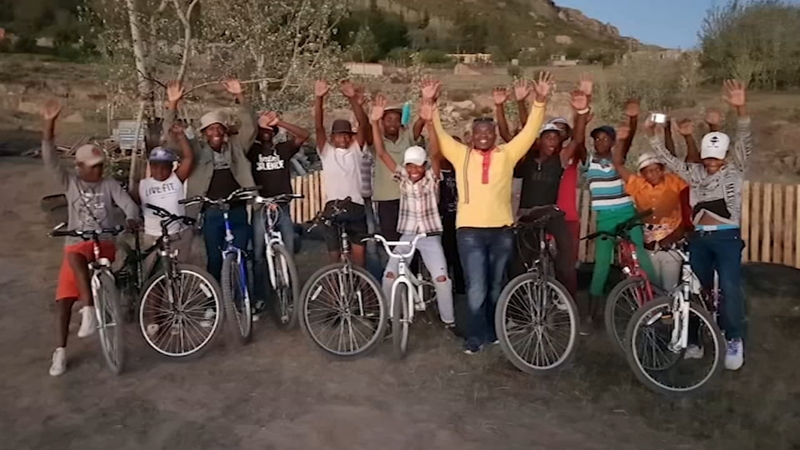 CHICAGO (WLS) -- Working Bikes is a Chicago nonprofit in Little Village dedicated to rescuing bicycles from the scrap yard or landfill, giving them new homes and giving their recipients new lives.

"Lots of people look at a bike, and they're like, 'It has a flat tire. It's no good,'" said Anna Henschel, volunteer program manager at Working Bikes.

The organization was founded in 1999 by Lee Ravenscroft, Amy Little and a group of like-minded volunteers. They recover, repair and refurbish discarded and donated bicycles, then sell and redistribute them locally, domestically and internationally.

"We are a nonprofit bike empowerment organization," said Trevor Clarke, executive director of Working Bikes. "We've been around about 20 years, helping give old bikes new homes. Every year now we collect about 12,000 bicycles and try to put each one to the best possible use."

The organization will send out about 1,200 bicycles to people in need locally, with the majority of those donations going to people referred to Working Bikes through social service organizations.

"The bikes that otherwise might end up at the scrap yard or in a landfill still have a lot of value in them," said Clarke. "We're trying to take all these old things, put some love into them, and keep them going for years to come."

"Some of them also go to schools, community centers. We donate a lot of bikes to kids," Henschel said. "We also ship bikes to bike shops, our international partners all over the world, primarily in Africa and Central America."

One of those partners is Bikes for Lesotho.

"Bikes for Lesotho is a project I started as a former Peace Corps volunteer to try to bring bikes to kids in Lesotho, especially orphans," said Dave Gorman, Bikes for Lesotho.

"Thirty percent of the adult population in Lesotho is HIV positive, or has full-blown AIDS," Gorman added. "There are 100,000 orphans in the country. The fact that I had never seen a bicycle - I lived there for three years, been back a few times - was striking to me. And I thought, I'm going to send bikes."

Working Bikes is volunteer-driven, and governed by an all-volunteer board of directors. They are elected to two-year terms by members. And organizers said many people who received bikes come back to get involved.

"We've been really excited to find that some of the people who receive donation bikes from us then become part of our volunteer base," said Clarke.

One of them Is Richard Hale, who said Working Bikes is about second chances not just for bicycles, but people as well.

"The place I stay at, a halfway house, they volunteer. They had brought some bikes to us, about 20, 30 bikes, and they said, well, you can come down here and volunteer if you want to," he said.

Organizers know bicycles are forms of transportation, but they're more than that, too. They can be used to tow cargo, or even generate electricity through a pedal-powered machine. And they create opportunities, especially in areas plagued by poverty and high unemployment.

"A bicycle can be a tool that people need to be able to get employment opportunities, get to medical resources, really be able to self-determine their own path around their community," said Clarke.

"My dream is that maybe someday one person will see a bike that they donated to us back out in the streets in Chicago, somebody riding around on it," Henschel said.