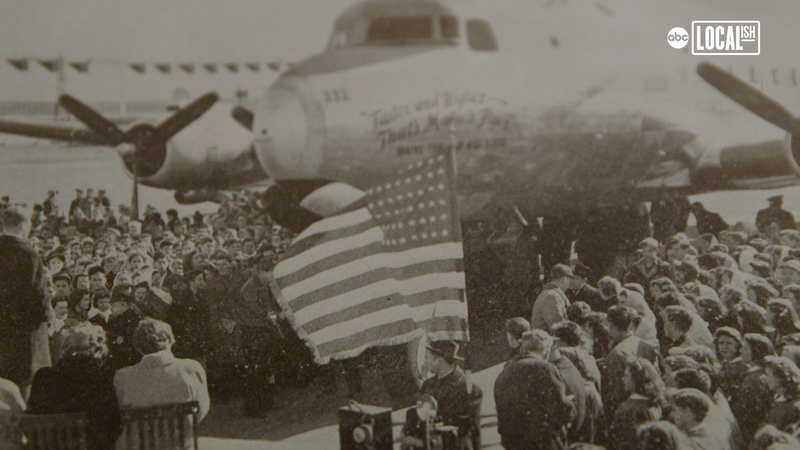 WWII plane returned to Chicago area, where high school students fundraised for it 80 years ago

DES PLAINES, Ill. -- In 1944, students from the northwest Chicago suburbs sold over $500,000 in war bonds to build a new WWII transport plane. The students attended Maine Township High School in the building that is now Maine East, and the plane was assembled at the airfield we now call O'Hare International Airport. To honor the students, the c-54 aircraft was called the Maine Flyer.

Now, for the first time in nearly 80 years, parts of the plane are on display in the Chicago area for an exhibit at the Des Plaines History Center.

This exhibit covers the past century of aviation and aviators in the Des Plaines area, said executive director Philip Mohr.

Mohr said that the exibit was already up when he got a call from an aviation enthusiast in the region, Leonard Johnson. Johnson had aquired parts of the cockpit from the original Maine Flyer and offered to display them on loan in the exhibit.

Airline pilots say that the modern aircraft, you can basically fly with your fingertip, said Johnson, a retired firefighter. These you had to fight to fly and you could feel the plane.

Johnson tracked down the plane over 10 years ago. It was sitting in the middle of land belonging to the Pima tribe in Arizona. After over a decade of negotiation, Johnson flew to Arizona and extracted key parts of the cockpit.

The airplane was used for personnel, medical and supply transport during the war, then later used to deliver aid as part of the Berlin airlift.

Mohr and Johnson both said they hope that any living students from 1944 still living in the area can come see the plane. Adjusted for inflation, the amount of money raised would been over $8 million today.