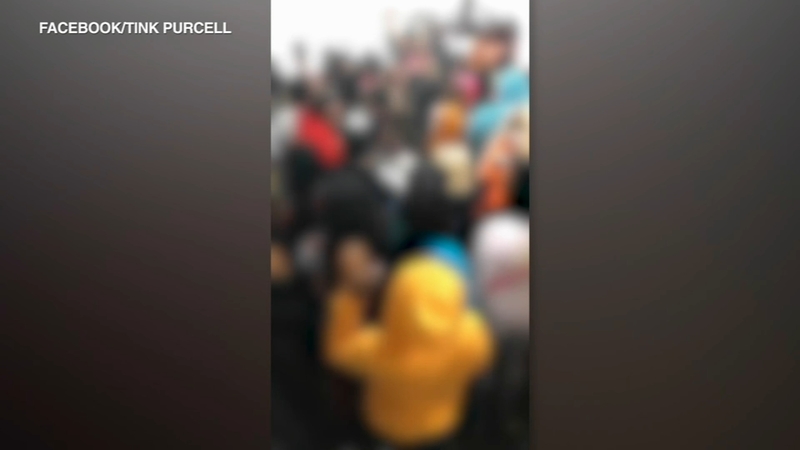 CHICAGO (WLS) -- Chicago police said they have confirmed the location where a viral video reportedly showing a large house party on Chicago's West Side was filmed.

The video, showing party-goers barely able to move, has gone viral with over 1 million views and drawn criticism from Mayor Lori Lightfoot and Governor JB Pritzker.

Chicago police said Monday afternoon they had confirmed where the party took place and determined officers responded to the home in the city's Galewood neighborhood over the weekend.

"Shortly after midnight on April 26, officers from the 25th District responded to multiple calls regarding a large party at a private residence on the 2000 block of North Narragansett Ave," Chicago police said in a statement. "The responding officers dispersed approximately 50 individuals from the residence and closed the event without further incident, citations or arrests. A subsequent review of the incident was conducted by the 25th District, and the homeowner was issued a notice of violation for disorderly conduct on April 27. The City will follow up with the owners of the property and attendees to ensure any health risks that could have arisen from this party are monitored and mitigated. The Department thanks the surrounding community members and Alderman Villegas for their partnership in this investigation."

Mayor Lightfoot said she has seen this video which was recorded on Facebook Live on Saturday around midnight showing people packed into a house party on Chicago's West Side.

Lightfoot called the party "reckless" and "utterly unacceptable" and Chicago police have warned of their commitment to disperse crowds, issue citations or even arrest people.

At a press conference Monday afternoon, Lightfoot said, "Every single person who put themselves at risk puts the next person and the next person that they come into contact with at risk. That's why for me, that scene is so distressing, but we'll get to the bottom of it."

A flier posted on that same Facebook user's page advertises a party offering free food. There is no address provided, but the flier said to "DM/Inbox for location."

One man who wanted to remain anonymous said his neighbors had a large party Saturday night and said many called 911.

"It shouldn't be happening," he said. "When they go home, they're putting their families in jeopardy and putting us in jeopardy. All for one fun night and it's not worth it."

Gov. Pritzker recently extended the stay-at-home order, which bans public and private gatherings of more than 10 people who are not members of the same household.

He reacted to reports of the video at his daily briefing Sunday, saying it's literally putting people in danger.

The illicit gathering prompted a reaction from several South and West Side pastors trying to find a better way to communicate the seriousness of the pandemic.

"You can have fun for one day, but it could be tragic if it costs you your life or the life of somebody else," said Rev. Ira Acree, Greater St. John Bible Church. "Many of these young people, it looks like from the video, are really young people - 19, 20, 21 - no doubt living with their parents, or how about this, with their grandparents who are the most vulnerable."