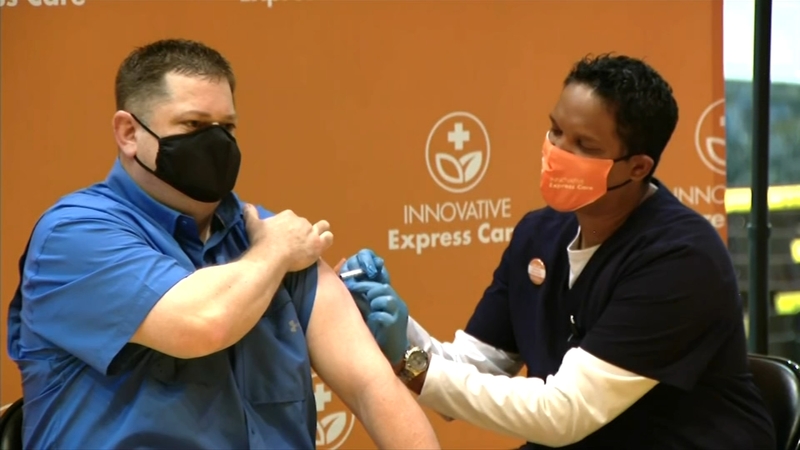 CHICAGO (WLS) -- The Chicago Dept. of Public Health is cutting off distribution of the COVID-19 vaccine to the healthcare group that was contracted to vaccinate Chicago Public Schools employees.

CDPH said Innovative Express Care, located at 2400 N. Ashland Avenue, "knowingly misallocated" 6,000 doses of vaccines meant for CPS employees. As a result, CDPH said it will be reclaiming all vaccine distributed and stored at IEC.

Innovative Express Care issued a statement denying the allegations, claiming the so-called misallocated doses were not used by CPS at the end of each week and were given as first doses to seniors, frontline workers and other qualified patients.

A spokesperson for IEC said in a statement: "All vaccine doses that were not used by CPS at the end of each week went to another eligible patient for their first dose. We always ensured that there were enough allocations for additional doses for all CPS employees."

IEC said the city's decision left them "saddened" and "disappointed," adding that "CDPH officials never made it clear to us as a provider that we should be storing vaccines in a refrigerator for people awaiting second doses."

CDPH said it has identified new providers to take over and administer vaccine for those scheduled to receive a dose through Innovative Express Care.

But for Renee LaBuda, it means another appointment scramble.

"My second dose was scheduled for Friday so now I'm in a panic and I don't know what to do," she said.

LaBuda got a call and a message saying her IEC vaccine appointment was cancelled and was given a website and phone number to call.

"I was on hold for 10 minutes and they didn't know," LaBuda said. "I said my appointment at Innovative Express was cancelled. She said I don't know what you're talking about and she hung up on me."

LaBuda said tried the number again but with no luck.

"I got two days, two days to get them during the second dose appointment somewhere," LaBuda said. "I'm, I really hope somebody helps me, I really do."

The Chicago's Teachers Union called what happened "a failure on multiple levels from people who run our school district."

We strongly disagree with the allegations made by the Chicago Department of Public Health stating a misallocation of vaccines intended for CPS staff.
We proudly operated four CPS vaccination sites. As of last week, every CPS staff member had been given an opportunity to be vaccinated due to our capacity to effectively operate a vaccine distribution effort. CPS highlighted the news of an effective partnership during a CPS event last week that celebrated the vaccination distribution. In the official press release, CPS officials stated that a significant amount of CPS employees received vaccinations as of March 17, 2021. Innovative Express Care is proud to have vaccinated thousands of CPS employees at one of the four sites and many other CPS employees at our clinic.
All vaccine doses that were not used by CPS at the end of each week went to another eligible patient for their first dose. We always ensured that there were enough allocations for additional doses for all CPS employees. We received vaccine allocations each week, and our intention has always been to have a 100% utilization rate in order that every single dose we received was put into the arm of a qualified patient that week. Clearly, we took this idealistic vision very seriously, which meant that doses intended for CPS employees actually went to seniors, frontline essential workers, and other qualified patients. We never departed from the commitment to CPS employees, nor other qualified individuals.
The decision by CDPH officials today leaves us bewildered, saddened, and frankly disappointed in our local government. CDPH officials never made it clear to us as a provider that we should be storing vaccines in a refrigerator for people awaiting second doses. Rather, we have been following the nation's commitment to get as many vaccines in eligible patients' arms, as quickly as possible. Our mission involved vaccinating as many eligible patients as quickly as possible, and not at the whims of the city official's latest political crisis.
To be clear, Innovative Express Care has vaccinated eligible individuals in a phased approach as dictated by the City of Chicago and the State of Illinois since January. We have been learning with other health providers along the way, always adhering to medical ethics. We have helped numerous community organizations by proactively scheduling eligible individuals who live in medically underserved Black and Brown communities. Our past history as recorded in numerous media accounts and our patients' own voices of appreciation on social media are evidence towards our positive impact. Effective vaccine distribution should be modeled, not penalized.

We have served our community since the start of this pandemic, and we will continue to do so through testing. We are deeply disappointed in the city's decision to remove us as a vaccine provider. Chicago needs more vaccination sites that are actually distributing their doses to eligible patients, not fewer.


Full statement from Chicago Public Schools
Since the CPS vaccination program fully opened last month, we have been able to consistently offer at least 1,500 first dose appointments to all staff each week while rapidly expanding eligibility to include all employees. We are deeply concerned by the allegations involving Innovative Express, and are committed to a smooth transition that ensures minimal disruption for staff. We have worked with the Chicago Department of Public Health to identify a new vaccination partner that will begin operating our vaccination sites this Thursday, and Innovative Express's actions have not impacted our ability to offer appointments until this point.

Full statement from Chicago Teachers Union
After listening to the mayor and CPS leadership tell us that vaccinating teachers prior to returning to in-person instruction was impossible, then about how 'robust' their plan was, we now find out that 6,000 doses of the vaccine have been taken and given to others instead of educators and CPS workers - many of whom are some of the most medically vulnerable people working in our schools. A number of teachers and staff have had appointments scheduled for less than 24 hours from now cancelled. It's a failure, on multiple levels, from the people who run our school district.
"CPS and the mayor have been cancelling leaves because they believed vaccinations were offered to our members, and launched a smear campaign accusing them of non-compliance in receiving and reporting doses. But this, plus Loretto Hospital, makes two scandals in a matter of days. Before CPS cancels anyone's leave, they may want to run an audit on who is doing what with vaccine doses meant for the workers in our schools. And the Chicago City Council should be calling for hearings into how the city is partnering with organizations to administer this potentially life-saving medication.

The Chicago Department of Public Health (CDPH), from the beginning of the vaccine roll-out, has been clear that all providers who are given COVID-19 vaccine doses must strictly adhere to all CDPH guidelines and reporting requirements regarding the administration of received vaccine doses.
If CDPH learns of any vaccine that is not being appropriately administed, CDPH acts quickly to determine if distribution or administration guidelines have been properly followed. When necessary, CDPH will pause or cease the delivery of new doses to providers not adhering to the guidelines. When we do this, our first priority is to minimize disruption to the vaccination process and residents who have vaccine appointments.
To that end, today, CDPH has ceased distribution of the vaccine to Innovative Express Care ("IEC"). IEC entered into a contract with Chicago Public Schools to administer vaccine to CPS employees. CDPH has since learned that IEC administered vaccine to non-CPS individuals without prior authorization. As a result, CDPH will be reclaiming all vaccine distributed and stored at IEC pursuant to standard secure transport protocols.
Based on CPDH's review of IEC's vaccine allocations and administration, we have determined that they knowingly misallocated more than 6,000 doses of vaccine-including using vaccine allocated for second doses for first dose appointments instead. This is completely unacceptable behavior.
We have already identified new providers to take over and administer vaccine for those scheduled to receive a dose through Innovative Express Care.

Continuity of operations is our highest priority. CPS personnel with appointments on Wednesday, March 24 will be rescheduled for the near future and notifications are in progress. CPS personnel with existing appointments on Thursday, March 25 and thereafter will continue to be vaccinated at the same CPS high school site where they were originally scheduled.
IEC will not be doing any more first dose vaccinations, and people can visit Zocdoc to find available appointments. Anyone scheduled for a second dose appointment though the Innovative Express clinic will be vaccinated at a special clinic set up for them at Truman College. Those individuals are being contacted and provided with next steps for scheduling their appointment.
Since we began our vaccination efforts, we have administered more than 1 million doses at more than 200 providers across the city with a special focus on individuals at highest risk for serious illness from COVID-19. We will continue to work closely with providers who are vaccinating in line with that mission.
Report a correction or typo
Related topics:
health & fitnesschicagolincoln parkcoronavirus chicagocoronaviruscpschicago public schoolscoronavirus illinoiscovid 19 vaccinecoronavirus pandemic
Copyright © 2021 WLS-TV. All Rights Reserved.
CORONAVIRUS CHICAGO
Ex-Northwestern professor to stand trial in 2017 fatal stabbing
Chicago LIVE Again! brings performing artists together at Navy Pier
$7.4M in COVID impact grants uplifts community plans
City wants 77% of eligible residents to start vaccines by end of 2021
TOP STORIES
Teen shot 7 times while sitting in car outside SW Side home: family
49 shot, 6 fatally, in Chicago weekend violence
IL man ID'd in fatal Amtrak crash involving train from Chicago
Northwestern investigating alleged drugging incidents at gatherings
Man charged with attempted murder after officer shot in South Shore
Fundraiser held for officer hurt in shooting that killed Ella French
Ex-Northwestern professor to stand trial in 2017 fatal stabbing
Show More
OH haunted house actor stabs boy, 11, while trying to scare him
Couples get married in mass Magnificent Mile wedding ceremony
Mother, 2-year-old son killed in fall at Petco Park before Padres game
Gabby Petito honored at memorial service on her native Long Island
Man attempts to storm cockpit, strangles attendant on JetBlue flight
More TOP STORIES News