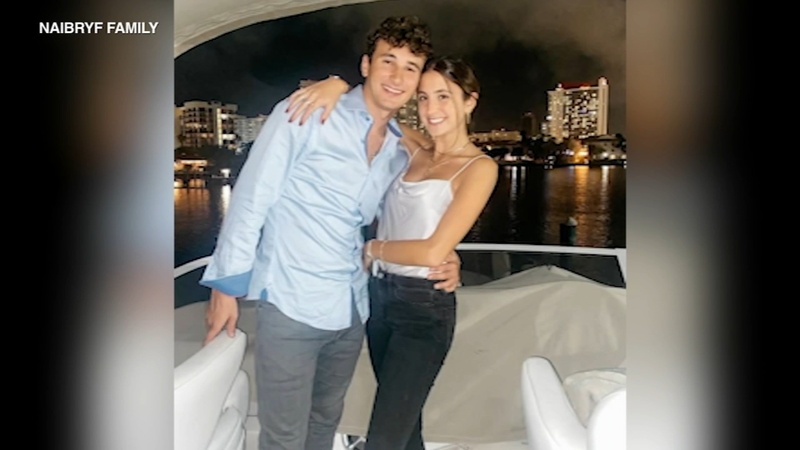 CHICAGO (WLS) -- Three Chicago residents are among the 159 people unaccounted for after a condo building collapsed early Thursday morning in Surfside, Florida.

Ilan Naibryf attends the University of Chicago and is a member of the student board of Chabad on campus. His girlfriend, Deborah Berezdivin, was with him in Florida and is also missing.

"I'd like to be hopeful," said Ronit Naibryf, Ilan's mother. "I'd like to believe in a miracle. But I am not hopeful that I will find my son alive."

Naibryf said her son and his girlfriend were staying her parents' Champlain Towers apartment to attend a funeral in south Florida.

"My son texted me on Thursday, should I stay here or should I go home to spend the night," she said. "I didn't answer and then he wrote me, 'I am going to dinnerin 15 minutes.' I wrote him 15 miuntes later and he had never answered. He went out to dinner."

"We're really worried about him, obviously, and praying that they find him," said Rabbi Yossi Brackman, directors of the Rohr Chabad Center at the University of Chicago.

Rabbi Brackman said Naibryf is the student board president and an important part of the campus community.

U of C released a statement saying Naibryf is a rising fourth-year physics and molecular engineering student. The student dean released a statement, saying in part, "The university joins the nation in hoping for the safe recovery of Ilan and all who are involved in this tragedy."

Richard Augustine, 77, a Chicago native, is also missing. Debbie Hill said her father was supposed to fly to Chicago tonight for a weekend visit; he had just returned from the West Coast and was packing his bags to come to see her.

Hill said she got a call in the middle of the night about the collapse and is still waiting to hear from authorities in Florida. She said she's seen video of the collapse and her father's unit is among those seen falling.

The third missing Chicagoan is Juan Mora. He graduated from the Loyola University business school in 2011, according to school officials. Mora was visiting his parents at the time of the collapse, Miami Herald reported. Juan Mora Sr. and Ana Mora, who were born in Cuba but lived in Champlain Towers. All three are missing.

The company released a statement saying:

"Morton Salt can confirm that Juan Mora is an employee based in our Chicago headquarters office. He serves as manager of East Coast Distribution for our road salt business.

We are shocked and deeply saddened to learn that Juan is reported to be one of the more than 150 people missing after the Champlain Towers South condo building near Miami, Florida partially collapsed early Thursday morning.

The Morton Salt team remains hopeful for Juan, his family and the other victims of this tragedy and will keep them in our thoughts as rescue efforts continue.

Morton Salt also plans to make a $25,000 donation to a local agency to assist with relief efforts and support services."

And while the longer the search for survivors goes on, the less hope there seems to be, Rabbi Brackman offered a reminder to never give up entirely.

"As a Jewish people we've survived on miracles in many ways, and we believe miracles happen,"

Chicagoan and former Champlain Towers South resident Nicholas Hansen said he recently moved out of the building. He now lives a few blocks away and rushed over to help after the collapse.

A wing of the 12-story building in the community of Surfside came down with a roar around 1:30 a.m. By late afternoon Thursday, nearly 160 people were still unaccounted for, authorities said, raising fears that the death toll could climb sharply. Officials did not know how many were in the tower when it fell.