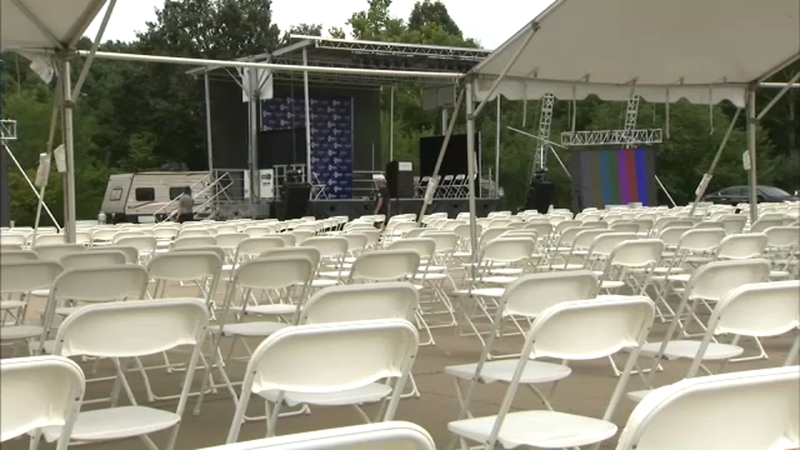 SPRINGFIELD, Ill. (WLS) -- Democrats and Republicans are descending on Springfield this week for the Illinois State Fair in what is typically the kickoff to the political primary season.

Republican will gather on Thursday and Democrats are meeting Wednesday, with COVID concerns forcing some changes.

Last year, the pandemic forced the cancellation of the state fair and with it the political gatherings, fundraisers and hobnobbing that goes along with it. That is contributing to the enthusiasm for both sides to gather the party faithful.

The brunch that will kick off the Governor's Day festivities has a very different look and feel this year. The event has been moved outside of the Crown Plaza Hotel where Democrats usually gather and will be held under tents. About 1,000 people are expected to attend. In pre-COVID years, two to three times that many have packed the hall inside.

The governor will not be there, despite the change of venue, but he will host his own event later on the state fairgrounds.

"I announced that I wouldn't be able to attend, or decided for myself that I wouldn't attend, because I was concerned about an indoor gathering and I made other plans," said Governor JB Pritzker.

Some speakers will not attend in person, including Senate President Don Harmon, who came down with a breakthrough case of COVID-19.

For Democrats, the big political race will be among the four declared candidates vying to replace Jesse White, who is not running for another term as Secretary of State.

Democrats also distanced themselves from last year's battle, where Senator Dick Durbin's candidate to be the new party chair won out over the governor's.

"I think, you know when you enter the world of politics, competition is an inherent part of it and then you have the competition and you move on," Illinois Attorney General Kwame Raoul said.

Republicans, who will host their rally on Thursday, will try to capitalize on Pritzker's pandemic shutdown and mask mandates while selling a different vision for the state.

"We value the individual, we value the ability of people to be able to make it intelligent decisions for themselves and their family, that's what the rallying cry is going to be about, everything else is just pointing back to what it is Republicans believe," said Dan McConchie, Senate Republican Leader.