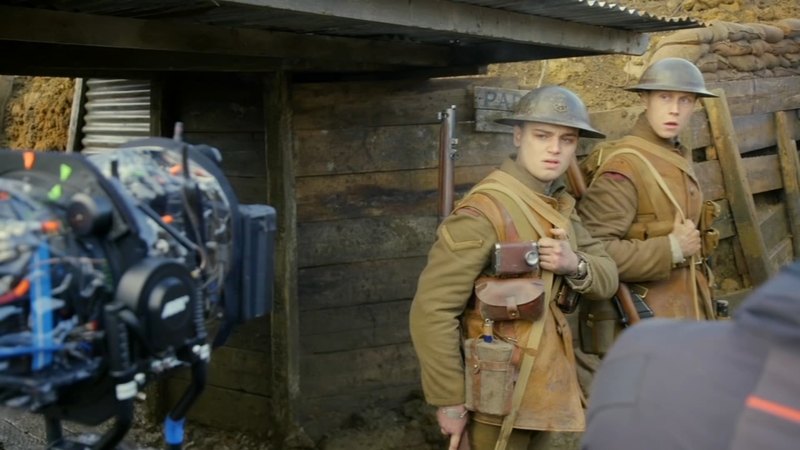 CHICAGO (WLS) -- Sam Mendes' new film "1917" is based on the experiences of his grandfather. The movie tells the story of two lance corporals sent to deliver a crucial message through a post-apocalyptic landscape behind enemy lines.

The film was created to look like one continuous shot, and there was plenty to rehearse before cameras rolled.

"We began six months before shooting on an empty field which would become the trenches, scripts in hand, walking through the scene, sussing out how quickly we'd say the lines, how quickly we'd be moving, what would be coming in either direction all that stuff," said George MacKay who plays Lance Cpl. Schofield.

Actor Dean-Charles Chapman, last seen in "Game of Thrones," went searching for his family connection to the war.

"It's my great great-grandfather called David Henry Pierce, and he was actually in a book called 'The Western Front Diaries,' which is snippets of diary entries," said Chapman, who plays Lance Cpl. Blake. "His diary entry is in there. I've read that pretty much every day before stepping on set to get me in the headspace."

The director made sure that the nightmarish landscape was authentic as possible.

"The No Man's Land sequence was really difficult," MacKay said. "I think because of the physical tension and the environment we were filming in. What you see on screen is how it was. And it was a drop in the ocean as to what those men went through."
Report a correction or typo
Related topics:
arts & entertainmentmoviesactor
Copyright © 2021 WLS-TV. All Rights Reserved.
TOP STORIES
Man shot, killed outside Chinatown neighborhood school: CPD
Defense rests after Jussie Smollett takes stand again
IL reports 7,068 new COVID cases, 78 deaths
Parents go on patrol to keep peace at west suburban high schools
Major outage hits Amazon Web Services; many sites affected
Nick Cannon mourns loss of his 5-month-old son Zen to brain tumor
New state program offers water/sewer billing relief
Show More
Reaction after money in walls of Lakewood Church, which Osteen heads
Police seek information on social media profile in Delphi murder case
OPRF resumes extracurricular activities Tuesday
Girl, 12, seriously hurt in Millennium Park shooting over weekend
Woodridge condo residents kicked out of homes for winter for repairs
More TOP STORIES News