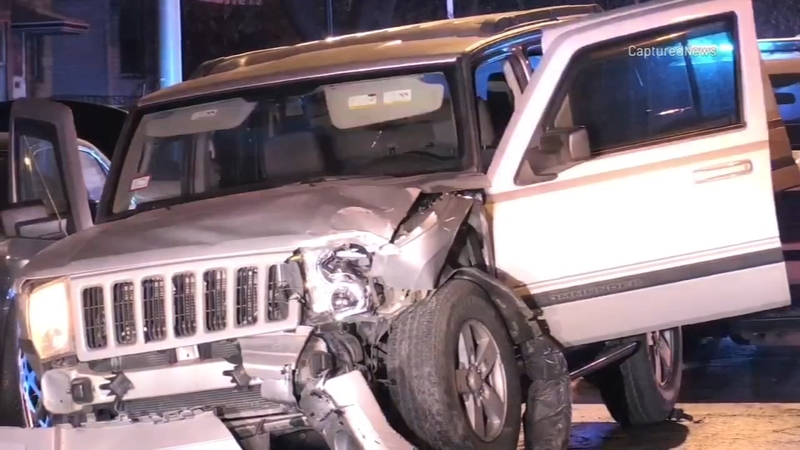 CHICAGO (WLS) -- Two people were arrested Friday after leading police on a chase in a vehicle wanted in connection with the fatal shooting of a nurse in Little Village earlier this week.

The pursuit started around 11:47 p.m. in the 2300 block of South Sawyer Avenue in Little Village, Chicago police said. The vehicle crashed into another vehicle in the 7500 block of South Perry Avenue, and two people inside the vehicle were taken into custody for questioning.

Police believe one of the suspects may be connected to the drive-by shooting that killed 32-year-old Frank Aguilar. Charges are pending.

The vehicle involved in the police chase matched the description of the one used in Aguilar's murder. Charges are pending against the person in police custody.

Aguilar had just returned from his shift as a nurse for Misericordia Home when someone in a gray SUV drove by and opened fire, according to police.

Aguilar was in the neighborhood to visit his family and do a load of laundry. He was carrying a laundry basket when he was fatally shot.

"It's great CPD went above and beyond for my nephew," said Joshua Alcazar, Aguilar's uncle.

She said he was determined to never fall into gang life.

"He was never about that life. He never did anything to merit that, he always inspired all of us to do better," Esquivel said.

A wake and funeral for Frank Aguilar will be held Wednesday.

While his murder has changed his family's life forever, it has also changed the direction of his uncle's future.

Joshua Alcazar said the attention Chicago police has paid to his nephew's case has motivated him to become a police officer.

"Becoming a member of CPD is how you make a difference," Alcazar said.