Dolton firefighter, 35, dies after he collapses at Harvey house fire 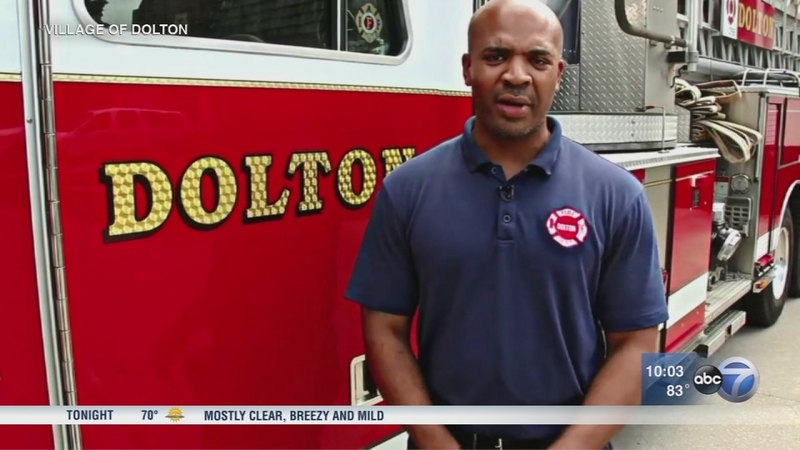 DOLTON, Ill. (WLS) -- We're learning more about the firefighter who collapsed and died while on the job.

The fire happened in Harvey, but the firefighter who died was from nearby Dolton.

A final salute for a fallen firefighter. A procession of police, and fire department vehicles from all across the south suburbs accompanied the body of Dolton firefighter Lawrence Matthews from Ingalls Hospital in Harvey to the Cook County Medical Examiner Saturday afternoon.

Matthews fell ill while assisting during a fire at a mobile home park in Harvey.

"We were doing exterior work. It was a defensive fire. Our crews, the fire was spreading to a rubbish fire and that's where he was going to tend to. He wasn't even out there that long," said Steve McCain, Dolton fire chief.

Dolton fire officials said Matthews initially appeared to have shortness of breath and began leaning on a fence for support. He collapsed shortly after and was pronounced dead at Ingalls Hospital.

In July 2016, Matthews participated in a village of Dolton video promoting an upcoming health fair. It was a topic he was passionate about. Ten years ago last week, he had received a life-saving heart transplant, according to his Facebook page. He met his wife at the same hospital he was operated on.

Even before getting called out to Saturday's fire, Matthews was on duty, helping to administer exams to 250 applicants to the Dolton Fire Department.

Matthews had been with the Dolton Fire Department since 2008, according to the 100 Club of Chicago. The organization's president and COO visited his family Sunday and presented them with initial financial support. Matthews is survived by his wife and four children.

"Our deepest and most sincere condolences go out to the family of our fallen firefighter Lawrence Matthews. There is a great emptiness left by the death of Mr. Matthews, however I am certain the strength and love demonstrated by his family and his fellow firefighters, will carry us through this difficult time of mourning. We did not simply lose a firefighter in the line of duty. Mr. Matthews was a man committed to saving the lives of others. A lifesaver has lost his life, and he will be deeply missed. Please keep his family in your thoughts and prayers and may God bless and comfort all who share fond memories of him."

A Dolton firefighter died while battling a fire in Harvey.

A house fire near 150th and Rockwell in Harvey.