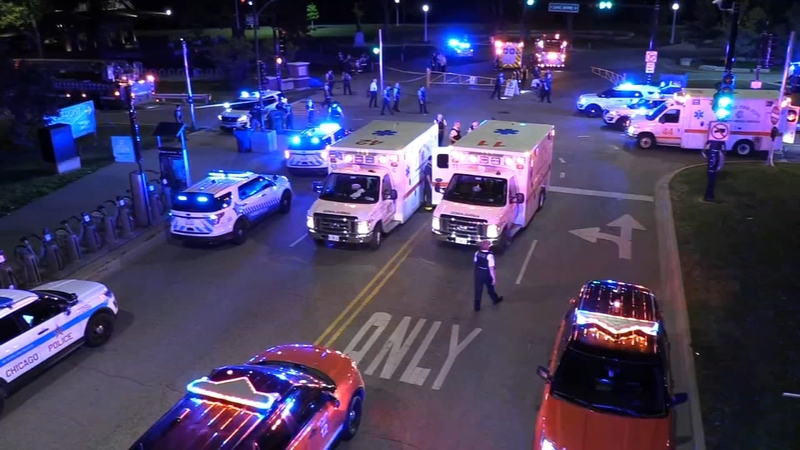 Police say the first shooting injured seven people on the North Side near Fullerton Avenue and Lake Shore Drive around 3:20 a.m.

According to a police, a group of individuals were walking towards the lakefront and another group was leaving. Both groups got involved in a verbal altercation that escalated into a physical altercation. It's unknown what the argument was about, but during the incident, individuals from both groups pulled out handguns and fired shots at each other.

Police say at least seven people were struck by bullets outside the historic Theater on the Lake complex along Lake Michigan in Lincoln Park.

Three women - 28, 27 and 24 years old - were taken to local hospitals with gunshot wounds to the leg, arm and shoulder, respectively, police said. Two men, 28 and 25, were both shot in the leg and taken to Northwestern Memorial Hospital.

Those five people are in good condition, police said.

At a news conference Saturday afternoon, a CPD spokesperson said an additional camera has been added along Canon Drive.

About 5 minutes earlier around 3:15 a.m. another shooting took place along the lake at the 31st Street Beach on the Southside.

Police say a 29-year-old woman reported that she was walking when she observed two unknown males involved in a verbal altercation. One of the males pulled out a handgun and fired shots, sending one in her direction and striking her in the abdomen. Both of the men fled on foot. The woman was transported to the University of Chicago Hospital in stable condition.

No one is in custody in either shooting.

Police are asking anyone with information to call 911 or 311.