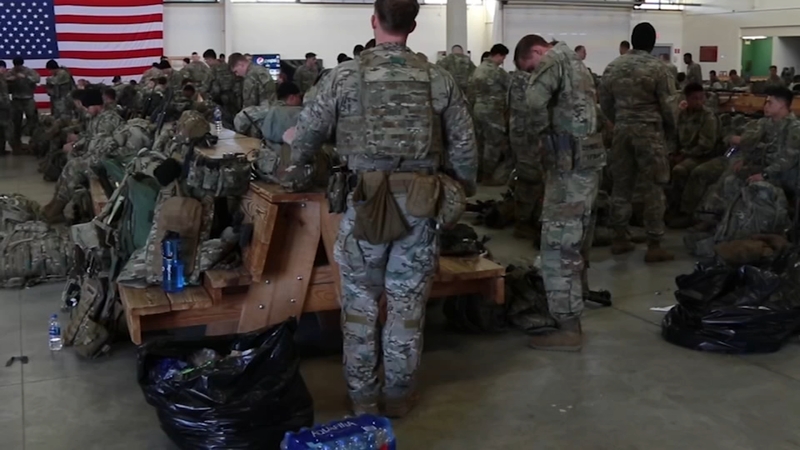 FORT BRAGG, N.C. -- A U.S. official confirmed to ABC News that approximately 3,500 more troops from Fort Bragg's 82nd Airborne Division will deploy to the Middle East, leaving the military installation as early as this weekend.

The decision is in anticipation of a possible retaliatory attack by Iran or its proxies for a U.S. airstrike near Baghdad's airport that killed a top Iranian general who had been the architect of its interventions across the Middle East.

RELATED: Iranian Gen. Qassem Soleimani should have been 'taken out' years ago, Trump tweets

The killing of Gen. Qassem Soleimani, the head of Iran's elite Quds Force, marked a major escalation in the standoff between Washington and Iran, which has careened from one crisis to another since President Donald Trump withdrew from the 2015 nuclear deal and imposed crippling sanctions.

Soleimani "made the death of innocent people his sick passion," Trump said Friday from his estate in Palm Beach, Florida, and he added that "a lot of lives would have been saved" if he'd been hunted down years ago.

The official indicated the troops would likely join the 750 soldiers from the 82nd who already arrived in Kuwait.

The U.S. also deployed about 100 Marines to the U.S. Embassy in Baghdad on New Year's Eve.

A senior U.S. Department of Defense official also told ABC News that some members of the 173rd Airborne Brigade Combat Team in Vicenza, Italy have been placed on alert status to possibly deploy to the Middle East. They would likely go to protect the U.S. Embassy in Lebanon--one of the countries where ABC reported there were "imminent attacks" on American interests.

The official said fewer than 1,000 troops would likely be deployed.

A spokesperson for the 82nd Airborne Division released the following statement Friday evening:

As previously announced by the Office of the Secretary of Defense, the Immediate Response Force (IRF) brigade of the 82nd Airborne Division was alerted to prepare for deployment, and are now being deployed. One battalion of the IRF has already deployed to the Central Command area of operations. At the same time, the remainder of the brigade was placed on 96-hour notice. This deployment was an anticipated and expected outcome when they were placed on notice. The brigade will deploy to Kuwait as an appropriate and precautionary action in response to increased threat levels against U.S. personnel and facilities in the region. Approximately 3,500 Paratroopers in total will deploy to the Middle East. They are ready to answer the Nations call; fit, well trained, and disciplined.

Also Friday, the Pentagon placed an Army brigade in Italy on alert to fly into Lebanon if needed to protect the American Embassy there, part of a series of military moves to protect U.S. interests in the Middle East. Speaking on condition of anonymity, an official said the U.S. could send 130 to more than 700 troops to Beirut from Italy. The official was not authorized to be identified.

Almost 24 hours after the attack on Soleimani, Iraqi officials and Iranian-backed militias in Iraq reported another deadly airstrike.

An Iraqi government official reported a strike on two vehicles north of Baghdad but had no information on casualties. Another security official who witnessed the aftermath described charred vehicles and said five people were killed. Both officials spoke on condition of anonymity because they were not authorized to speak to the media.

Iraqi state television and the media arm of the Iran-backed militias known as the Popular Mobilization Forces also reported the strike. The group said its medics were targeted.

An American official who spoke on the condition on anonymity denied the U.S. was behind the reported attack.