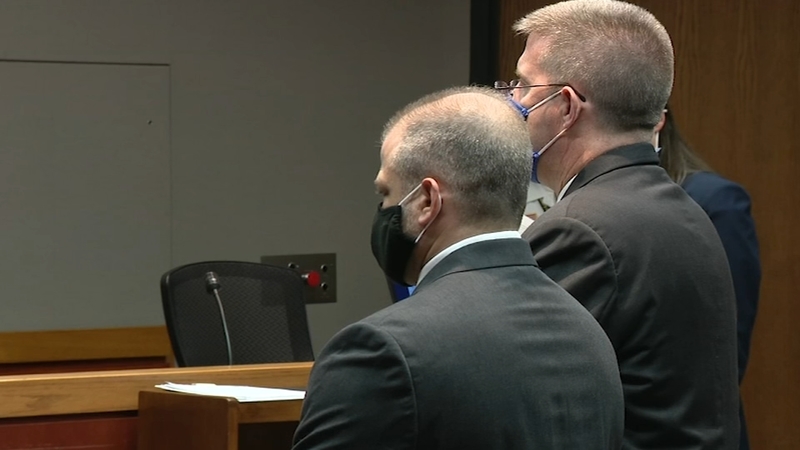 WOODSTOCK, Ill. (WLS) -- Andrew Polovin, one of the two former DCFS workers charged in the death of 5-year-old A.J Freund, pleaded not guilty in a court appearance Thursday.

Polovin, 48, and Carlos Acosta, 54, have both been charged with endangering the life of a child and reckless conduct.

The indictments accuse Polovin and Acosta of knowingly permitting AJ to be placed in circumstances that endangered his life.

A lawsuit filed on behalf of AJ Freund's estate accuses these men of failing to fully investigate allegations of abuse against AJ.

A status hearing in Polovin's case has been scheduled for October 29. He faces between two to five years behind bars....or probation.

Acosta will be arraigned next week.

A group supporting justice for AJ was present outside the courthouse.

"It's about time," said Tracy Kotzman, a member of the group. "I'm very happy that charges have been filed and I hope they stick."

The Crystal Lake boy was found dead in a shallow grave not far from his parent's home last year. The horrifying child abuse case sparking outrage in the community and calls for DCFS to be held accountable.

RELATED: Andrew Freund, the father of AJ Freund, could reach plea deal this week in murder of Crystal Lake boy

Andrew Freund, who is charged with murdering his 5-year-old son AJ in Crysal Lake, appeared in court Wednesday.

"They failed him," said Rosa Mallette. "No ifs ands or buts about that. He should have been removed from the home."

DCFS declined to comment on the charges against their former employees.

A former DCFS worker who has been charged with child endangerment in the AJ Freund case entered a not guilty plea in court Thursday.

AJ's mother, JoAnn Cunningham, pleaded guilty last December to the Crystal Lake boy's murder. In July, she was sentenced to 35 years in prison.