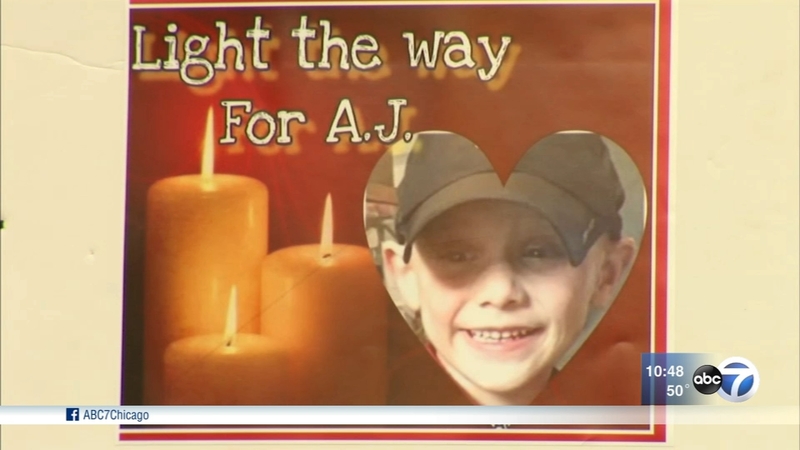 CRYSTAL LAKE, Ill. (WLS) -- Saturday, more than hundred little candles were passed throughout a crowd near Crystal Lake's Main Beach as members of the community gathered for a vigil to "Light the way for AJ."

It's been three days since anyone has last seen 5-year-old AJ Freund who disappeared from his home on Dole Avenue.

"When our community is hurting, it affects every single one of us," said vigil co-organizer Lisa Kincaid. "When we think of AJ being missing, he is our child."

People were given the opportunity to offer words of support and prayer.

"Let's obviously keep in mind AJ's parents and the extraordinary grief, they obviously must be going through," said Father Jerome Koutnik with Saint Thomas Church.

Saturday, Crystal Lake Police and the FBI said they were focusing their investigation on the family's home where neighbors have left stuffed animals and Easter baskets in hopes of his safe return.

AJ's parents attended the vigil, his mother, Joann Cunningham, came with a children's blanket wrapped around her. His father, Andrew Freund, Sr., stood back just having returned for an hours-long visit with Crystal Lake Police.

Before the vigil Freund Sr. made one more plea to the public.

"Everybody who has been so inclined please pray for the safe return of my son," he said.

And for the first time, we are hearing from Cunningham in an interview with Good Morning America.

Freund was seen going in and out the front door throughout the day and spoke briefly with reporters after leaving through a side door.
"We're just extremely worried," he said. "If anybody knows anything about where Andrew Jr. is please, please, contact the Crystal Lake Police Department. Let's get him home."

AJ's mother, Joanne Cunningham, appeared outside the home with her attorney George Kililis Friday afternoon for a brief press conference. Cunningham did not speak, but Kililis asserted her innocence and said she was not involved in AJ's disappearance. He said evidence of the search in the house was distressing for her, so she would be staying with a friend for a couple days.

Kililis said he was not representing Freund's father.
When asked, Crystal Lake police would not say if the boy's parents are considered suspects in the case, but did say based off information they've received investigators have now centered their attention on his home.