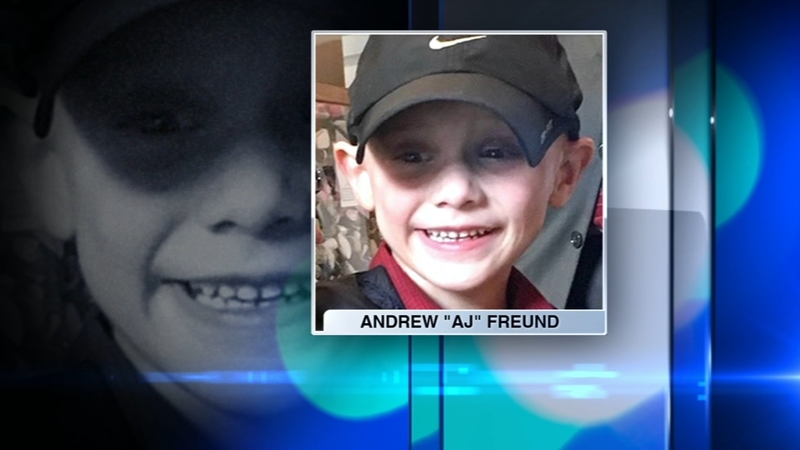 Freund's mom and dad say they have no idea where their son is, but they want him to come home.

AJ's father said he is fully cooperating with the police and is continuing the search for his 5-year-old son on his own. His mother's legal team says they cooperated fully but when it seemed that detectives were treating her like a suspect they stopped answering questions because she had already told them everything that she knew.

Crystal Lake police and the FBI are now focusing their investigation on the boy's home, which they call a crime scene.

Police said canine units only picked up AJ's scent within the residence, indicating Andrew had not walked away on foot. Police said there is no indication that an abduction took place.

The boy's father, Andrew Freund Sr., vowing to take the search into his own hands. He tells ABC7 he is cooperating with police, but continuing the search on his own.

The father says he is focused on his son's safety, not what others in the community may be saying about the case.

Four days into the search, the community is praying for the child's safe return.

His parents attended a vigil Saturday night where more than hundred little candles were passed throughout a crowd near Crystal Lake's Main Beach as members of the community gathered for a vigil to "Light the way for AJ."

His dad stood in the back, after he returned from a several-hour-long visit with Crystal Lake police.

His mom, JoAnn Cunningham, stood in the crowd with a children's blanket wrapped around her.

Cunningham spoke out for the first time to Good Morning America, making a tearful plea for her sons return.

Her lawyer now advising her to now keep quiet after Cunningham's legal team says she shared everything she knows.

"I realize that the police consider her to be a suspect. I advised Ms. Cunningham to remain silent at that point," one of her lawyers said.

The boy was last seen on Wednesday night. He has short, blonde hair and is approximately three-foot-five, weighing 70 pounds. He was last seen wearing a blue Mario sweatshirt and black sweatpants.

AJ's mother, JoAnn Cunningham, appeared outside the home with her attorney George Kililis Friday afternoon for a brief press conference. Cunningham did not speak, but Kililis asserted her innocence and said she was not involved in AJ's disappearance. He said evidence of the search in the house was distressing for her, so she would be staying with a friend for a couple days.