'The videos I saw don't explain what I saw in the morgue,' Alvarez's mother said
WLS
By Jessica D'Onofrio, Chuck Goudie, Michelle Gallardo and Leah Hope 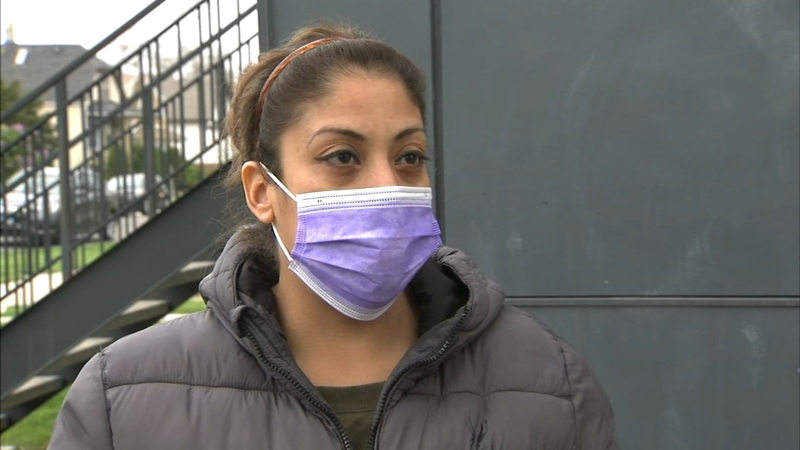 CHICAGO (WLS) -- Video of Chicago police fatally shooting a 22-year-old man on the city's Northwest Side last month was released to the public Wednesday morning as his family and Mayor Lori Lightfoot called for calm.

The Civilian Office of Police Accountability has made a rare recommendation that the officer who discharged his weapon, fatally injuring Anthony Alvarez, be relieved of police powers during the investigation.

The police shooting video release includes nearly three dozen recordings of the early morning encounter with Alvarez, from cameras worn by CPD officers to security cameras in the Portage Park gas station where the whole thing began a little after 1 a.m. on March 31.

The newly-released videos reveal several things: what is evidently a pistol in Alvarez's right hand until the time he goes down; that Alvarez didn't appear to point at police or fire any shots; and how the fatal encounter started. All of the video may be disturbing as you watch it.

The video begins with Alvarez cutting through a gas station with a CPD tactical unit following him. Police lights can be seen, but there is no sound on the video.

He's next seen moments later on a second camera at the gas station, running and tossing a bag as officers close in. Officers reported it as an "investigatory stop" for a person with gun.

Then, officers are seen pursuing Alvarez through a Portage Park alley for more than 30 seconds before turning onto a residential street, the 5200-block of West Eddy Street.

About five shots are fired by 29-year-old Chicago Police Officer Evan Solano. One went into Alvarez's right back, according to the medical examiner.

Alvarez can be heard asking police why they shot him. He later died at Advocate Illinois Masonic Medical Center.

A version of the video that had been slowed down and zoomed in on shows what appears to be a pistol in Alvarez's right hand and a glowing phone in his left hand.

The gun ended up a few feet away in the grass, in a picture made public by Chicago police. It is a 9mm, with a 17-round magazine and a laser sight.

"The officer has to make a determination whether this situation is a threat to other citizens, or to himself. And from what I see from the video, the young man is running away," said Tony Thedford, a criminal defense attorney at Thedford Garber Law.

Anthony Alvarez's grieving mother is still unsure why her son is dead after he was shot several times in the back as he ran away from police.

Alvarez's family watched the last minutes of his life play out on video at the Civilian Office of Police Accountability before its public release, but his mother said she still does not understand what led up to the deadly encounter with police.

"I want more answers," Veronica Alvarez said in Spanish translated through his cousin, Isai Adame. "The videos I saw don't explain what I saw in the morgue. I want to know why they were running after him. To this day, I have no answers. I still want answers as to why they were chasing my son."

Alvarez lived about a block away from where he was shot in the Portage Park neighborhood. Nearly a month later, there are still flowers and candles being added to a growing memorial. His grieving mother is still unsure why police were attempting to arrest him to begin with.

"The officers should have gotten out of the squad car and arrested him to begin with," Veronica Alvarez said in Spanish as she described how she interpreted the bodycam video. "Instead, they drove right up to him, flashed their brights. I would have been scared. A lot of us would have reacted in that way."

It remains unclear why officers were attempting to detain Alvarez that night. Alvarez appeared to have parked his vehicle then gone into a gas station next to his home and was coming out with bags in hand shortly before the chase began.

But he had a gun, and that is why some in the community are withholding judgement until COPA's investigation into the matter is complete.

"Routine traffic stops can become dangerous and in this situation, it did in fact escalate when Alvarez ran while armed, and it unfortunately ended the way it did," 15th Ward Ald. Raymond Lopez said.

"The rules of engagement are clear, and this officer followed them," Chicago Fraternal Order of Police President John Catanzara said.

The Alvarez family and Mayor Lightfoot released a joint statement Wednesday morning saying: "Both parties are acutely aware of the range of emotions that will accompany the release of these materials, and we collectively issue this statement and ask that those who wish to express themselves do so peacefully and with respect for our communities and the residents of Chicago."

They also renewed calls for a change to the city's foot pursuit policy, saying in part, "A minor and inconsequential incident should never, and can never again, result in someone's death."

"It's a sad day. It's a tough day. An investigation will continue for a while....My hope. And I pray that everyone stays calm," Reboyras said.

Out of an abundance of caution, the city's Office of Emergency Management and Communications said it is deploying city trucks in strategic areas to ensure safety.

Chicago police slowed the video moments before the officer fired his weapon and stopped the video with a red arrow to highlight what CPD labeled a firearm.

Chicago Police Supt. David Brown acknowledged he has seen videos of the police-involved shooting, but declined to comment on them.

CPD released an edited five-minute video of the incident after COPA released videos. In the CPD compilation of videos, officers are seen chasing Alvarez on foot. They slowed the video moments before the officer fired his weapon and stopped the video with a red arrow to highlight what CPD labeled a firearm.

A spokesman for COPA said the investigation remains ongoing, but at this point, there is enough information to recommend that officer be relieved of police powers.

While the officer is currently on a 30-day paid administrative leave, CPD said Supt. Brown is taking the COPA recommendation "under advisement."

The president of the Chicago police union criticized COPA's recommendation for any job action against the officer before the investigation is over.

"It's just a disgusting approach to vilify the police, and not give them a fair shake," Catanzara said.

To watch the full, unedited videos, visit the COPA website.

"Why did you shoot me?" Those were Anthony Alvarez's heartbreaking last words as he took his final breaths on a cold sidewalk in the Portage Park neighborhood -- a community Anthony called his home.

Anthony's family is overcome with grief by the loss of their beloved son, brother, cousin, and friend and they are still seeking an answer to Anthony's dying question. Yesterday's traumatic viewing of the videos at the Civilian Office of Police Accountability (COPA) provided no answer to this question and instead raised many more:

Why did Chicago Police Officers chase Anthony as he was walking home on March 31, 2021?

What crime had Anthony supposedly committed that gave rise to this police action?

How do the police explain the videos showing that Anthony was shot in the back as he attempted to flee?

Where is the Medical Examiner's report of Anthony's fatal injuries?

Anthony's family and the residents of Chicago deserve answers to all of these questions. Today, a spokesperson for the Chicago Police Department stated that there is "nothing wrong" with shooting someone from behind. The Alvarez family, and hopefully the investigating authorities, believes otherwise.

Anthony's family would like to remind the public that Anthony's legacy is much more than being "just another victim of a police shooting." Anthony was only 22 years old and a young father to his two-year-old baby girl when he was killed. His family and friends remember him as a doting dad who put aside his goal
of playing professional soccer when he learned that his girlfriend was pregnant. His father, Oscar Martinez, recalls that his son was one of the best soccer players in Chicago, who was always the top player in the most competitive leagues. Anthony, however, accepted work at a local meat packing plant so that he could support his family. Anthony's daughter was his life, and he gladly assumed the responsibilities of a parent. Anthony's mother, his girlfriend, and his friends and family are devastated by the violent loss of such a kind-hearted young man.

Oscar Martinez recounts how his son Anthony was with him the evening before he was killed. Anthony was so proud to show his father his new vehicle. They made plans for a family dinner in the coming days.

Oscar laments, "I can't believe he is gone. I really miss my son. I just want some answers; why did they do this to Anthony?"

The Alvarez family and their legal team will not rest until these questions are answered and justice prevails.

We have faith that COPA and the State's Attorney will thoroughly investigate this tragedy. The family requests that the media and the public respect their privacy during this difficult time and that any protests or demonstrations in Anthony's name be conducted peacefully.