After Aurora Pride lost appeal on revoked permit, city reinstated it after meeting police security requirements
WLS
By Diane Pathieu and Will Jones 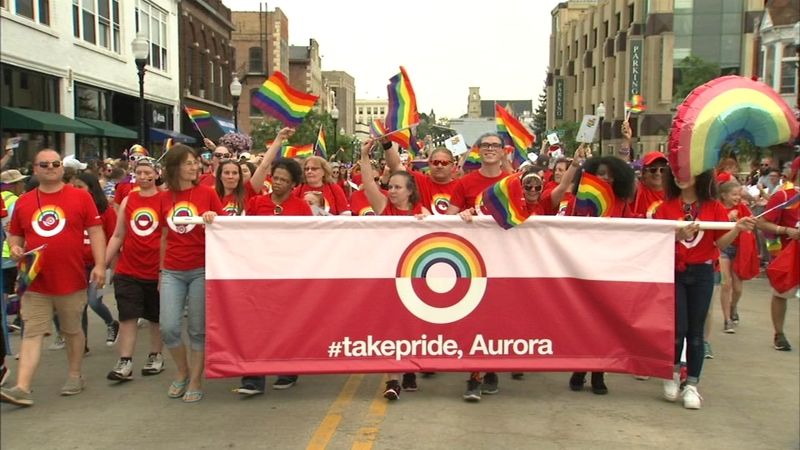 Aurora Pride Parade back on after city reinstates permit

AURORA, Ill. (WLS) -- The 2022 Aurora Pride Parade will be held Sunday after the city unexpectedly reversed their decision and reinstated the parade's permit Thursday afternoon.

The city and parade organizers Aurora Pride appeared in court earlier in the day as Aurora Pride tried to get the decision to revoke the permit reversed, but lost their appeal. A couple hours later, organizers announced on Twitter the permit had been reinstated.

"Great News! The City of Aurora has notified us that our permit for Sunday has been reinstated. The Aurora Pride Parade is on. We look forward to welcoming everyone on Sunday morning," Aurora Pride tweeted.

The city issued a statement shortly after saying, "Even after an independent hearing officer upheld the City's decision to revoke the Pride Parade permit based on manpower shortages, we continued our good faith efforts with the Aurora Police Department to secure the additional officers needed for the 2022 Aurora Pride Parade. The City didn't just double down on our efforts; we tripled down by offering an unprecedented triple-time financial incentive to our officers, and the required number of police officers to secure the parade has been successfully attained."

"Consequently, a rescission of permit revocation has been submitted to Aurora Pride, and the Aurora Pride Parade can proceed as planned for Sunday, June 12," the statement said.

Last month, parade organizers sparked controversy when they announced they would not allow police officers to march in the parade in full uniform or bring police vehicles.

"I can't believe what's happening. How can an event that was so amazing be canceled," said Tracey Sherman Falcon, Aurora resident.

Organizers of the 2022 Aurora Pride Parade said their special events permit has been revoked by the city due to police staffing issues.

The attorney for Pride organizers said, by not showing up, Aurora police are not doing their job, and they are prepared to file a federal lawsuit because they believe it's a constitutional violation.

The city's attorney said there is no hostility between the two groups, and there is just not enough resources.

Pride parade supporters said the city's decision to stop the event sends the wrong message to the LGBTQ+ community.

Businesses throughout downtown are also showing their pride for Pride.
If it happens, Anne Hauge is planning to participate with colleagues at the Paramount Theatre.

"It is really nice to me that there is a pride parade, that we can be out and loud and proud and queer," Hauge said.

Some restaurant and shop owners in downtown Aurora are planning to increase their staffing for the pride parade. But now they're playing it by ear as organizers scramble to find a way to keep the parade as scheduled.

Tecalitlan Restaurant's owner Marissa Valencia is a supporter of the LGBTQ community. The restaurant is decorated in honor of Pride Month.

"Just so they know that we support them and we are here from them," Valencia said.

She said parade spectators usually stop in to grab food.