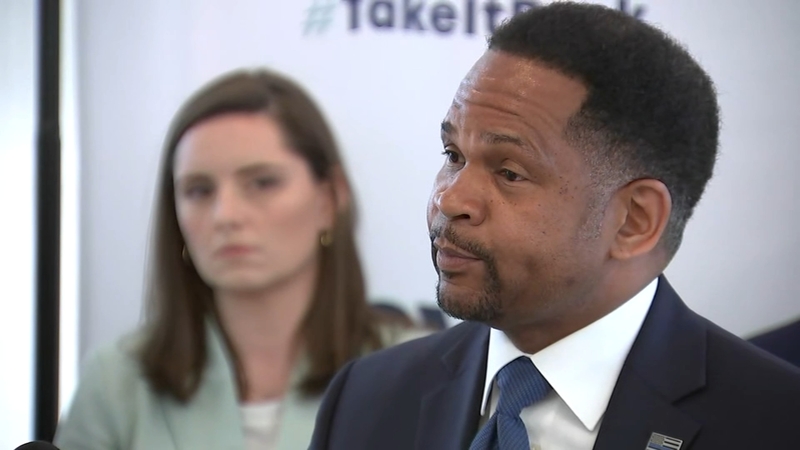 AURORA, Ill. (WLS) -- Pride Month is getting off to a rocky start in west suburban Aurora.

Mayor Richard Irvin, who is also running for Illinois governor, is distancing himself from the city's Pride parade over a police uniform dispute.

Pride Month starts on June 1, but Irvin said he will not be in Aurora's parade on June 12, and is even trying to pull the city's float from the event.

The dispute began when parade organizers forbid officers from marching in their uniforms or bringing police vehicles, saying some members of the LGBTQ+ community have been harassed by police even if it wasn't necessarily by Aurora police. They said having uniformed officers could make those people anxious.

"I think it's a little hypocritical of the organizers of the parade to say acceptance is important in our community and tolerance," Irvin said. "And say they are not going to accept our police officers - the very same police officers that work to keep our community safe and keep that parade safe."

Organizers said police can identify themselves with signs, banners or t-shirts, but not in full uniform.

"We are not excluding police officers. We invite them and we would love to have them there. We are not excluding a person, we're not excluding an identity, we excluding equipment essentially," said Gwyn Ciesla, president of Aurora Pride. "Many people have been traumatized in these ways and the presence of a police car or police uniform can be re-traumatizing in many situations, which would probably prevent them from joining the parade or even attending."

The Aurora Pride organization also will not take part in the Pride flag-raising ceremony held by city officials.

RELATED: Richard Irvin dodges questions on abortion, Trump at 1st Chicago-area news conference
The American Civil Liberties Union, or ACLU, also chimed in on the dispute, saying it is concerned by reports that government officials have apparently attempted to pressure the organization, Aurora Pride, to alter the composition of this year's Pride parade.

They went on to say it's in the organization's First Amendment rights to protect the message of its parade, which includes the composition and appearance of marchers.

Former Aurora police chief Kristen Ziman, who retired in September, said she was shocked by the parade's position, having walked in the parade herself in 2018 and 2019 alongside LGBTQ+ officers in uniform.

"It's baffling to me because it's ostracizing police officers who are part of a community themselves or strong allies and that to me is the ultimate irony because inclusion has been the battle cry of this community," she said.

She acknowledged the history of police mistreatment of LGBTQ+ people and people of color but said, "Only when we start seeing each other as human beings - in uniform or out of uniform - only then can we make progress and acceptance."

Irvin said it's a basic principle of community policing to have the city's officers in uniform for an event like that.

Aurora Pride organizers said they're disappointed law enforcement and city officials will not be in attendance.