Base jumper's parachute rips in mid-air; video shows him plummeting toward cliff 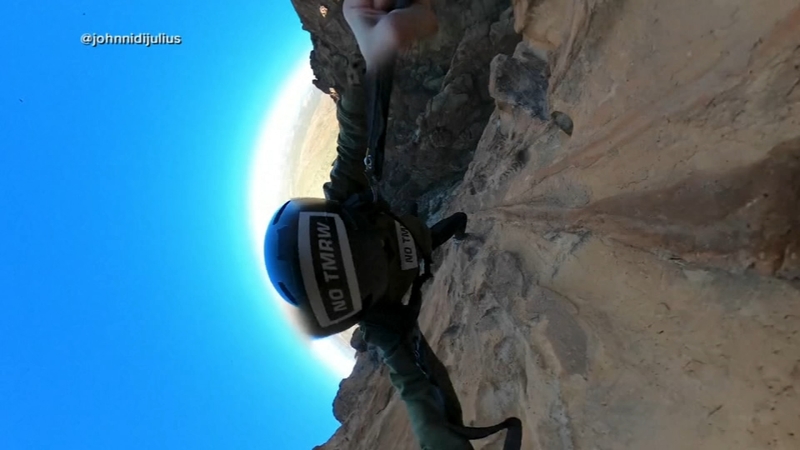 LOS ANGELES -- A terrifying stunt mishap was caught on camera in Arizona. A base jumper is seen soaring off a cliff, only for his parachute to rip - sending him plummeting towards the cliff face.

At least when Johnni DiJulius jumped into thin air his parachute opened. But then it spun him around, and angled him right into the cliff face. The 29-year-old regains some control, but quickly realizes, things have gotten worse.

As the video shows, he's now hurtling some 50 miles per hour right into a chimney spire. His parachute caught an edge just 50 feet off the ground.

"I'm hanging on this wall, not in the harness, I'm ungeared," DiJulius said, "and I was just kind of Spidermanned to this wall, right? For like, an hour."

Video shows him holding onto the cliff face for dear life. The stuntman and wrestling coach then uses his upper body strength to hoist himself up and fishes his phone out of his pocket.

He tells a friend he's "hung up," but somehow, uninjured.

The hardest part is still ahead.

"I just freaking huck it, land on my back on this bush," DiJulius said. "I couldn't really turn around. I call it a 'oh crap' jump."

The daredevil has jumped off a Skyscaper in Panama and he's gone wingwalking, but said this was his closest call.

"I walked away with no injuries," DiJulius said, "which is very rare for a, for a jump like that."