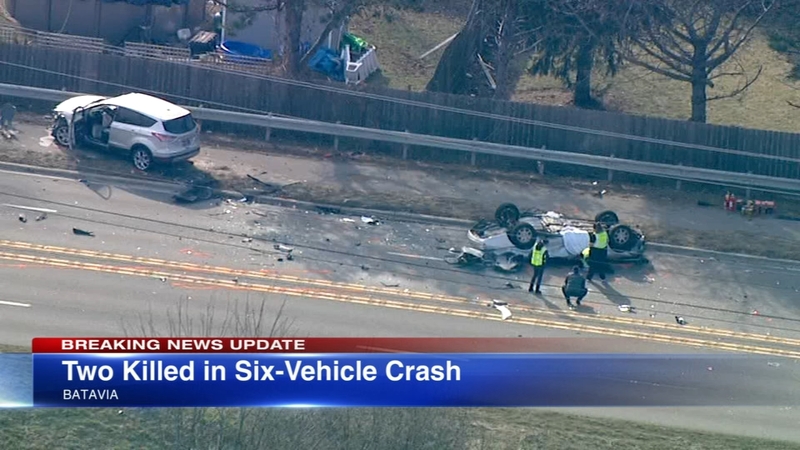 BATAVIA, Ill. (WLS) -- Two people are dead and two others, including a young child, were injured in a six-vehicle crash in west suburban Batavia Monday afternoon.

Batavia police said they responded to the crash in the 1300-block of S. Kirk Road around 1:36 p.m. and found one vehicle flipped over on its roof.

Police said the two occupants of the vehicle were deceased when they arrived. The identities of the victims are being withheld pending notification of their families.

In addition, a female and young child in another car were taken to a local hospital with non-life-threatening injuries, police said. No other injuries were reported.

Police believe that one of the passenger cars was changing lanes when it struck the semi-trailer, causing the car to cross over into oncoming traffic and then overturn.

As of 2:25 p.m., Batavia police said Kirk Road is closed between E. Wilson Street and Butterfield Road (Route 56) due to the accident.

Drivers are being asked to avoid the area. Police have not yet said if there were any injuries.

The cause of the crash remains under investigation, police said. No citations have been issued at this time.

The Kane County Accident Reconstruction Team is assisting in the investigation. Anyone with information about the crash is asked to contact the Batavia Police Department.