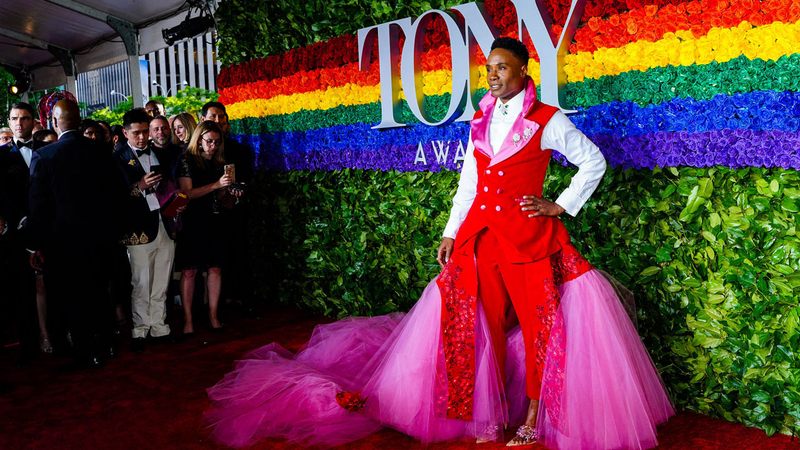 Looking back at Billy Porter's splashy red carpet looks from 2019

LOS ANGELES -- If there was one person who commanded attention every time he walked a red carpet in 2019, it was Billy Porter. The "Pose" actor threw tradition to the wind, rocking bright, bold colors and nontraditional silhouettes at nearly every chance he got.

Here's a look back at some of his most memorable looks from this past year. 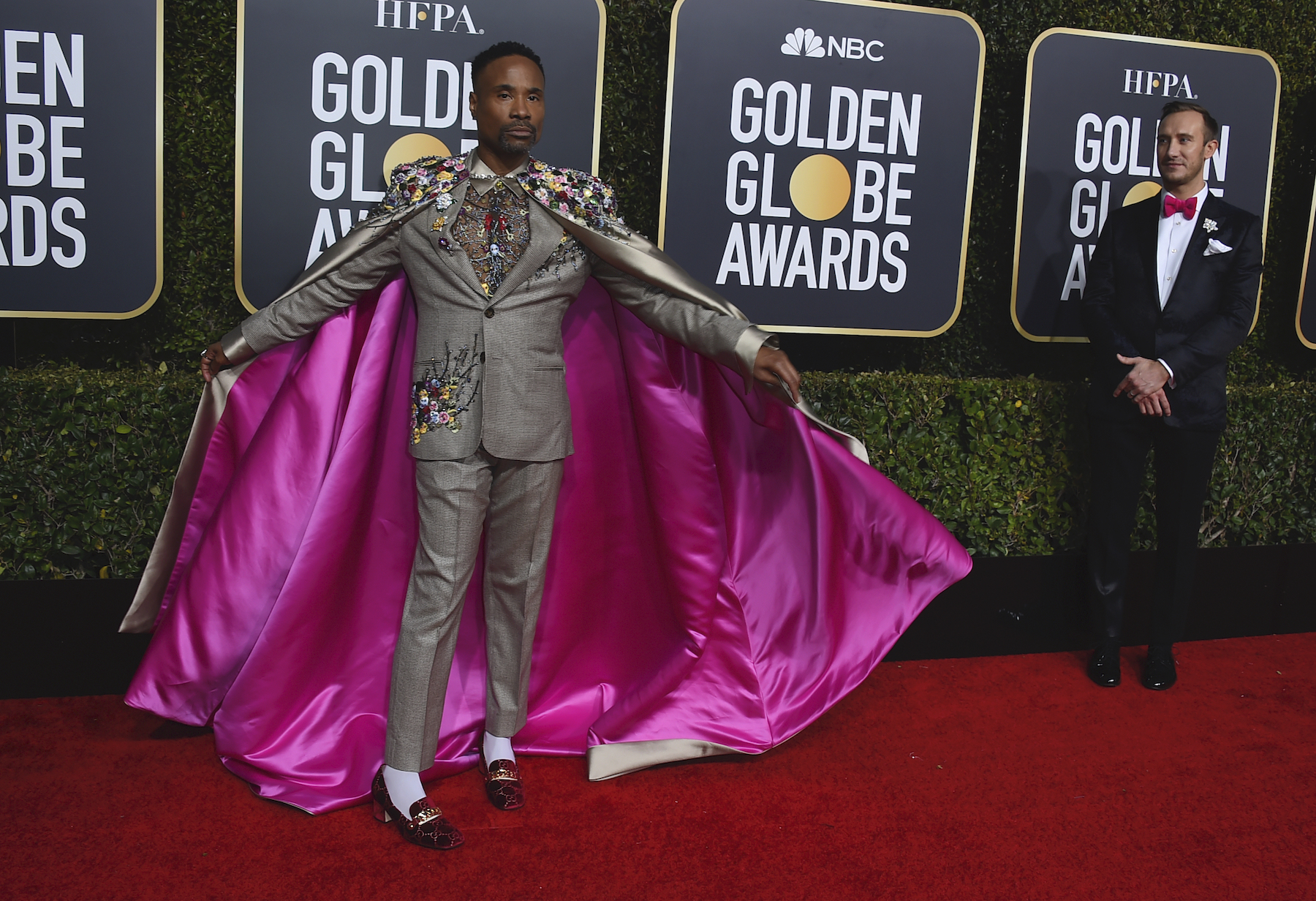 "Spring is coming, children," Porter teased in a beige couture Randi Rahm suit that featured a matching dramatic, floor-length cape with a bright pink lining. Both the suit and the cape were embelished with a floral pattern.

In an interview with The Hollywood Reporter, Rahm said the look took six months to create: "Just a single strand of the embroidery can take an entire week to complete and approve to my standards."

Porter completed the Sam Ratelle-styled look with oxblood heeled Gucci loafers and Oscar Heyman & Bros. jewelry. He was nominated for best actor in a drama series but lost to Richard Madden. 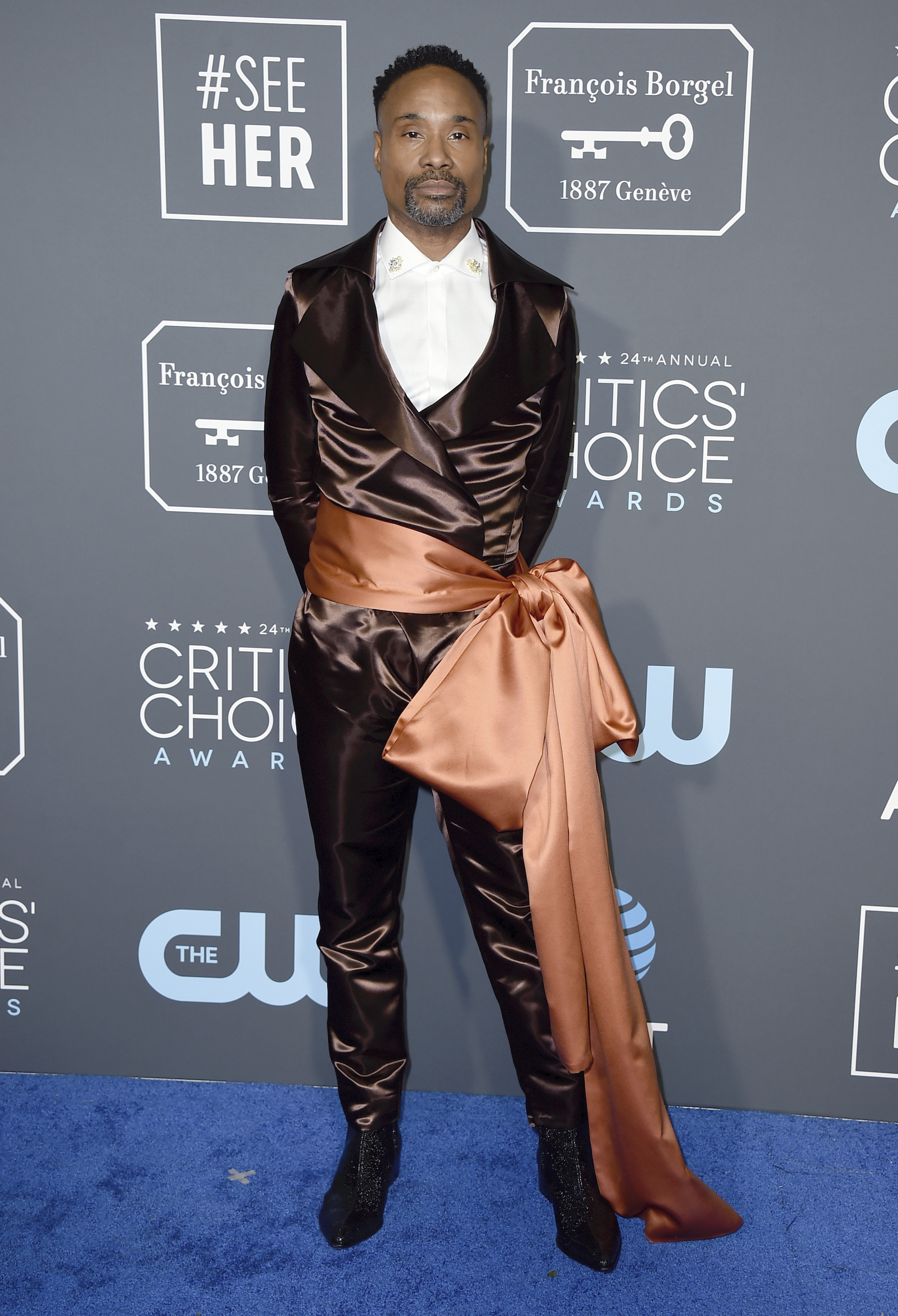 A week later, Porter donned what he described as a "tuxedo jumpsuit" for the Critics' Choice Awards in Los Angeles. The Rinat Brodach ensemble included a white shirt, brown satin jumpsuit and oversized orange bow at the hip. The look, also styled by Ratelle, included Jeffery West boots. 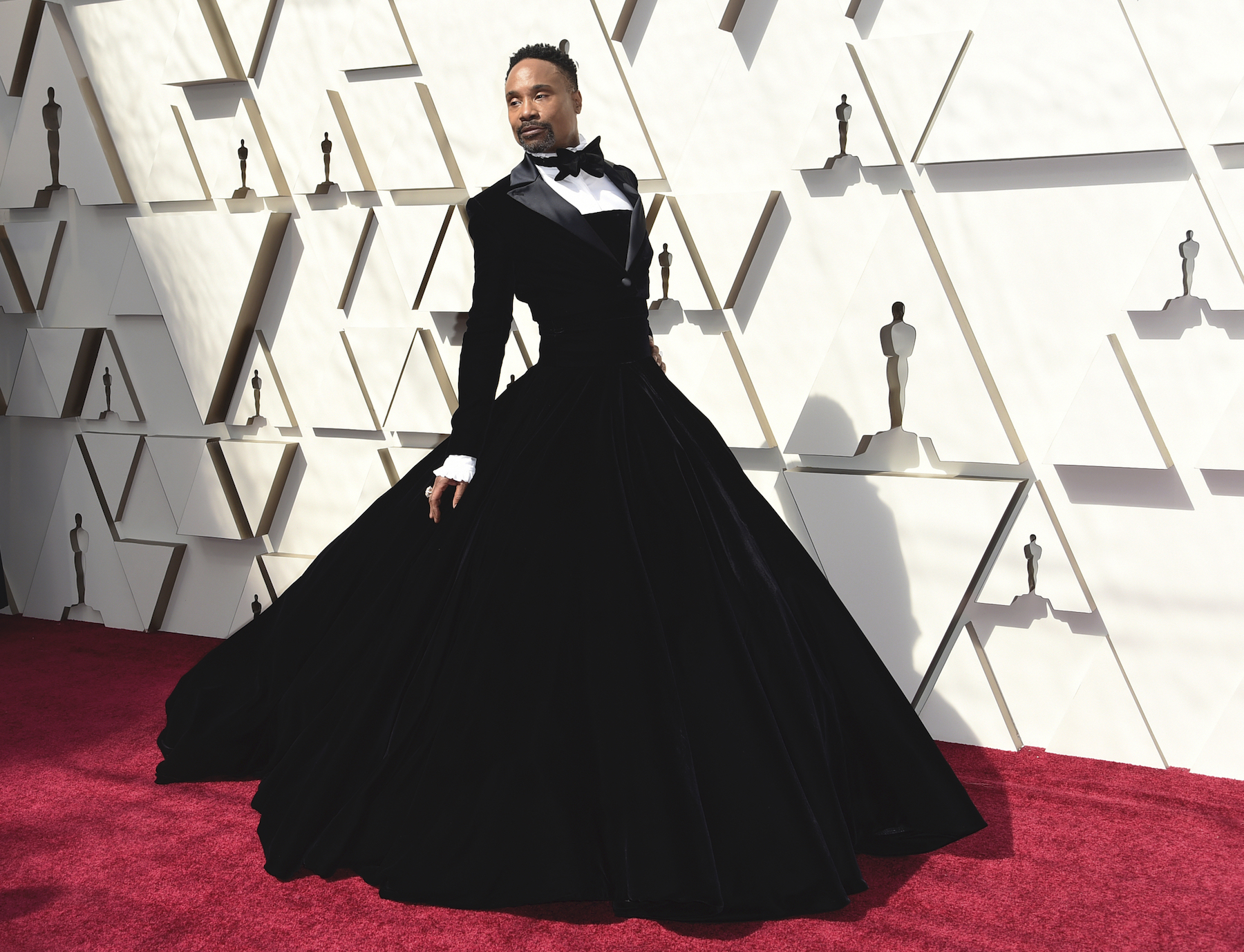 Billy Porter arrives at the Oscars on Sunday, Feb. 24, 2019, at the Dolby Theatre in Los Angeles.

Porter unveiled his sartorial piece de resistance at the Academy Awards: a custom velvet tuxedo gown designed by Christian Siriano. The outfit featured a traditional tuxedo jacket over a white shirt with ruffle detailing around the cuff and a full-length skirt.

"This look was interesting because it's not drag. I'm not a drag queen, I'm a man in a dress," Porter later wrote in a Vogue op-ed.

He added: "From this moment, I want people to understand that you don't have to understand or even agree with other people's authenticity or truths, but we must all respect each other."

The look was once again styled by Ratelle and featured Oscar Heyman & Bros. jewelry. 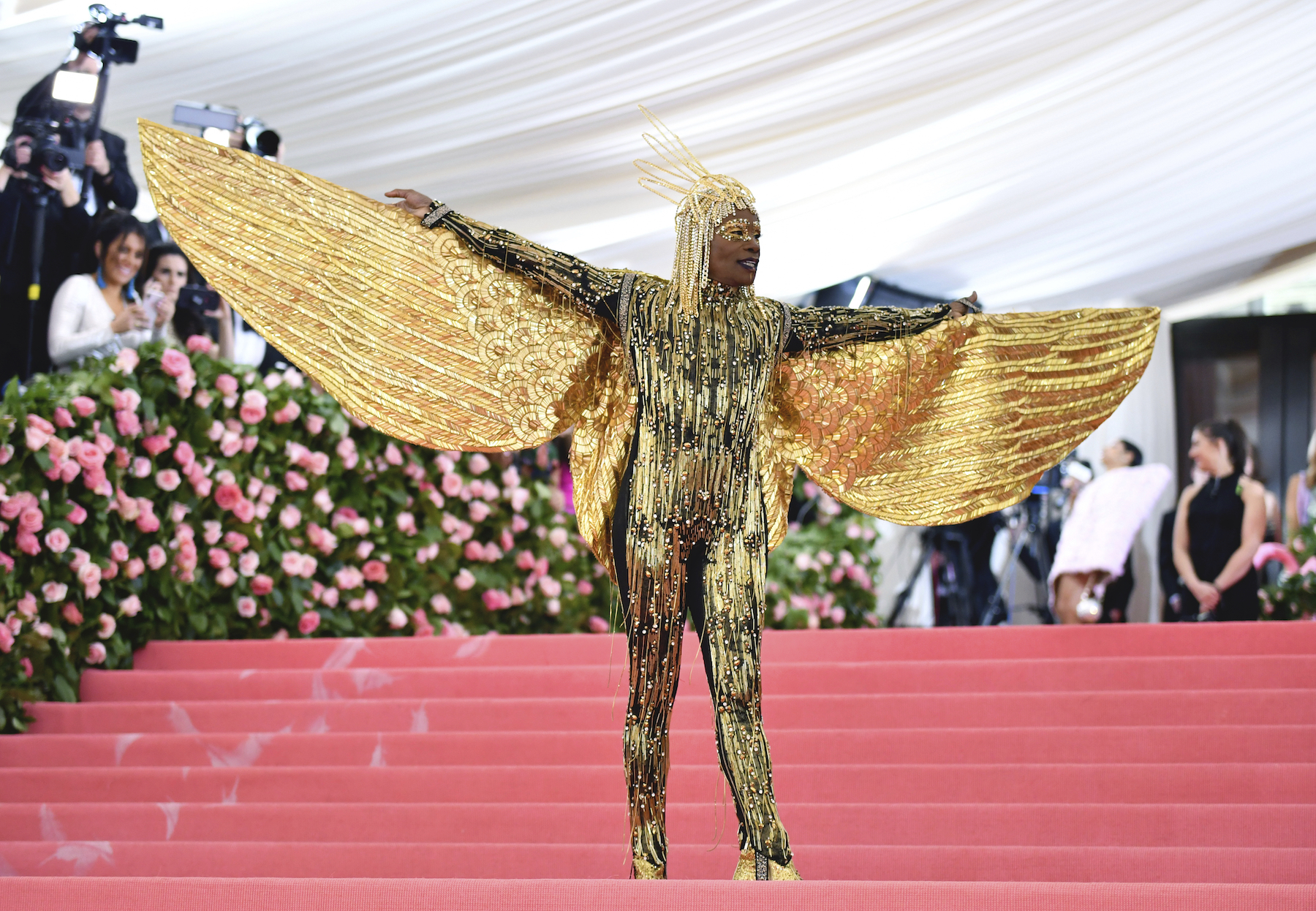 Billy Porter attends The Metropolitan Museum of Art's Costume Institute benefit gala celebrating the opening of the "Camp: Notes on Fashion" exhibition on May 6, 2019, in New York.

The Met Gala is perhaps the one place where everybody is dressed audaciously, so of course Porter had to up the ante to compete with his peers -- and up the ante he did.

A team of shirtless men in gold pants carried Porter onto the pink carpet as he lay on top of a black throne dressed as an Egyptian sun god in a gold metallic jumpsuit and a chain headpiece by the design duo the Blonds.

At the end of the carpet, he spread his arms to reveal shimmering golden wings.

On Twitter, Porter described the look as "old testament realness." He credited La Sonya Gunter for his makeup, Phillipe and David Blond of The Blonds for his "custom look," Giuseppe Zanotti for the shoes and Ratelle for styling and creative direction.

"He's been trying to do this for 30 years and no one paid attention," Ratelle later told PAPER of the look. "In the past, people overlooked him for being queeny and over-the-top, but now that's what's inspiring people, so it's been amazing to witness and be part of his evolution and see how the public responds, as well." 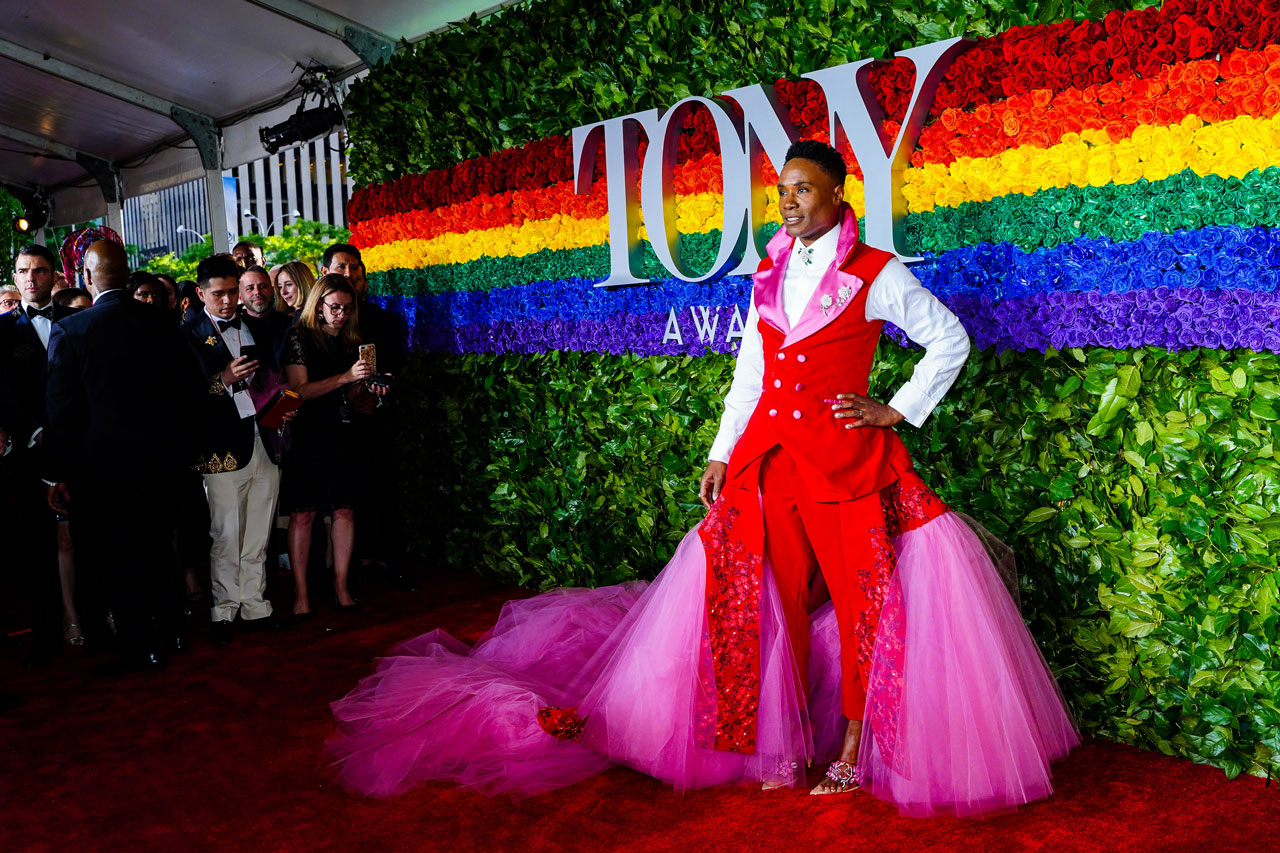 Porter's hybrid suit-gown silhouette made another appearance at the Tony Awards, this time with a lot more color. He donned a stunning red double-breasted vest with a contrasting pink lapel and collar. The outfit included matching red ankle-length pants and an embellished red and pink tulle train, all by Celestino Couture.

The outfit was constructed from the curtain used in "Kinky Boots," the Broadway show for which Porter won a Tony in 2013.

Porter told the New York Times about his inspiration for the look: ""I want to flip the question of what it means to be a man. This question of masculinity, this sort of microscope of heteronormative masculinity that we are very often held up to, especially as leading men, needs to be shattered. You know, it's toxic and I'm over it and I've lived it and I'm not doing it anymore." 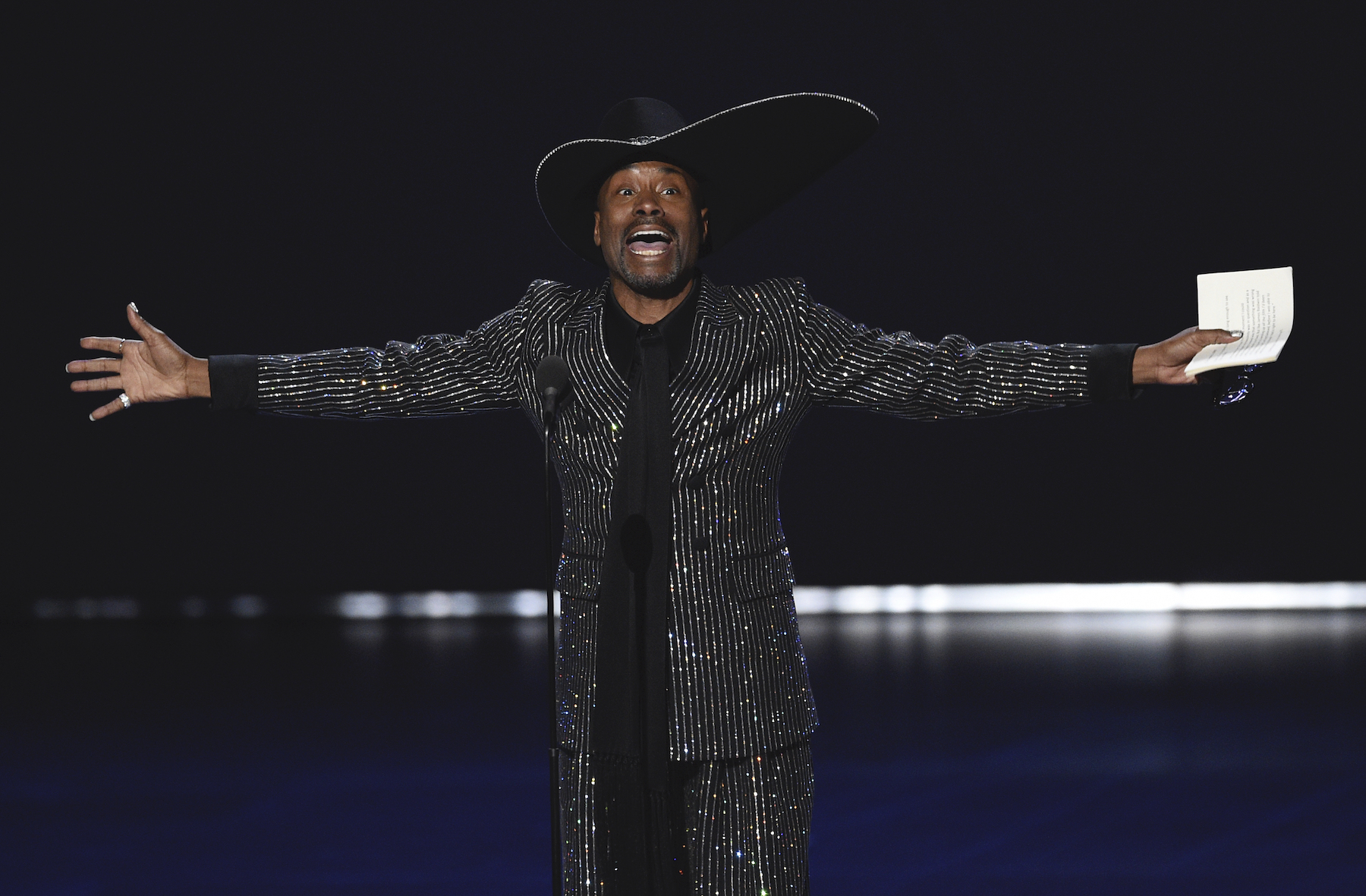 Billy Porter accepts the award for outstanding lead actor in a drama series at the 71st Primetime Emmy Awards on Sunday, Sept. 22, 2019, at the Microsoft Theater in Los Angeles.

Porter's Emmys look may have been a tad bit more traditional than his other outfits, but that didn't mean it was any less dazzling. He wore a custom pinstripe, wide-leg Michael Kors suit and an asymmetrical black hat by Stephen Jones Millinery.

Kors told the Hollywood Reporter that the suit took "over 170 hours to hand-embroider, and the pinstripes were created using 51,510 mini crystals for the jacket and 79,200 for the pants."

"Last night was all about sparkle and staying true to who I am. We always enter the runway with the best intention - to honor the event and to have fun!" Porter tweeted the next day. Porter was styled by Ratelle and once again wore Oscar Heyman & Bros. jewels.

The night was not just a big fashion moment for Porter. He won the Emmy for best actor in a drama, becoming the first openly gay man to do so. 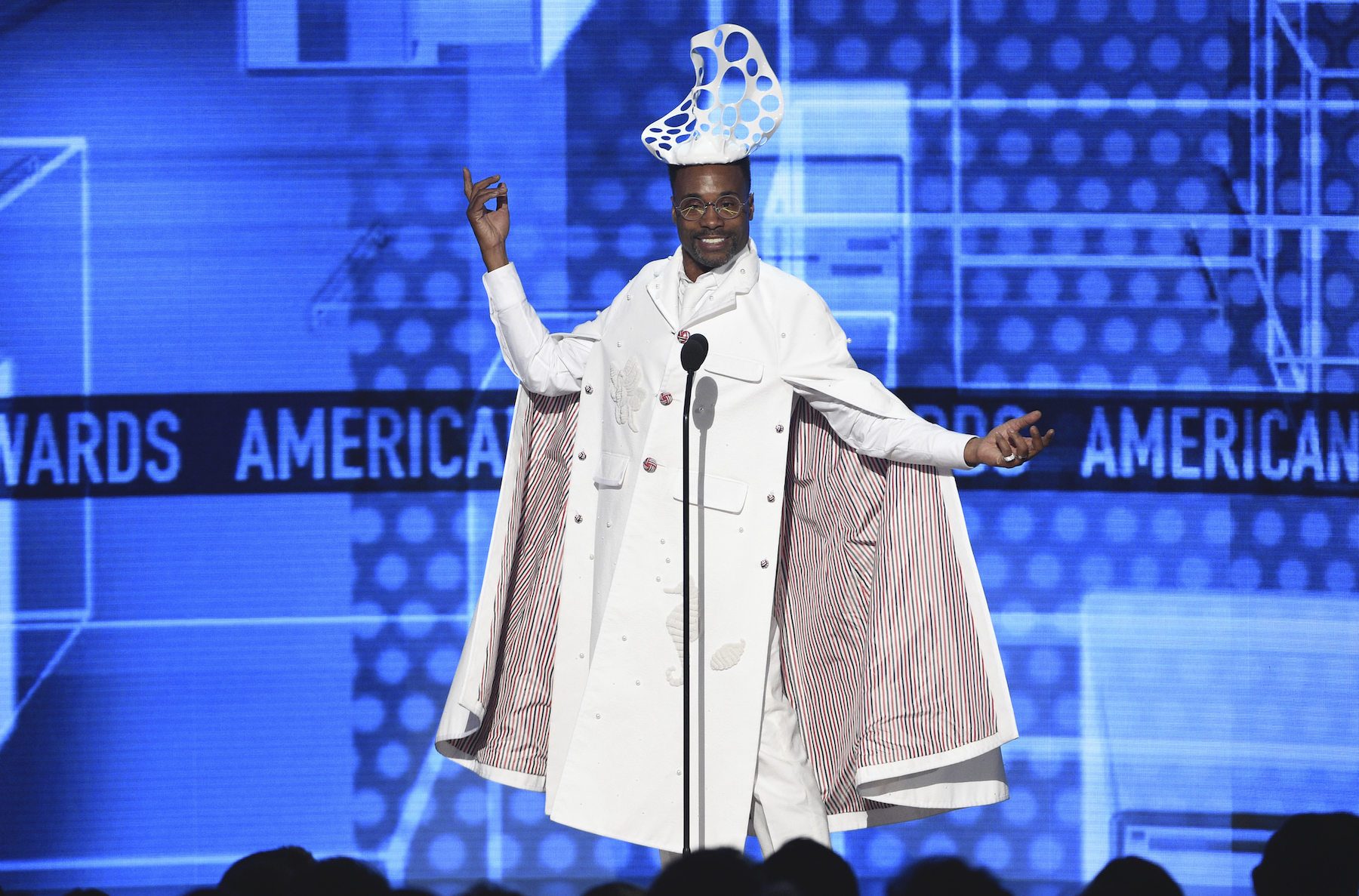 Billy Porter introduces a performance by Camila Cabello at the American Music Awards on Sunday, Nov. 24, 2019, at the Microsoft Theater in Los Angeles.

After his black Emmys suit, Porter switched things up for the American Music Awards, wearing a nearly all-white Thom Browne ensemble that included a white shirt and tie, knee-length coat and wide-legged pants. Porter pointed out on Twitter that the outfit included "hints of red, white and blue because I'm an American."

Porter later said of his look during the award show: "Understated. Low-key. Restrained. That is not how I approach the roles I play or the red carpet. Look at me, I'm an entire mood!"