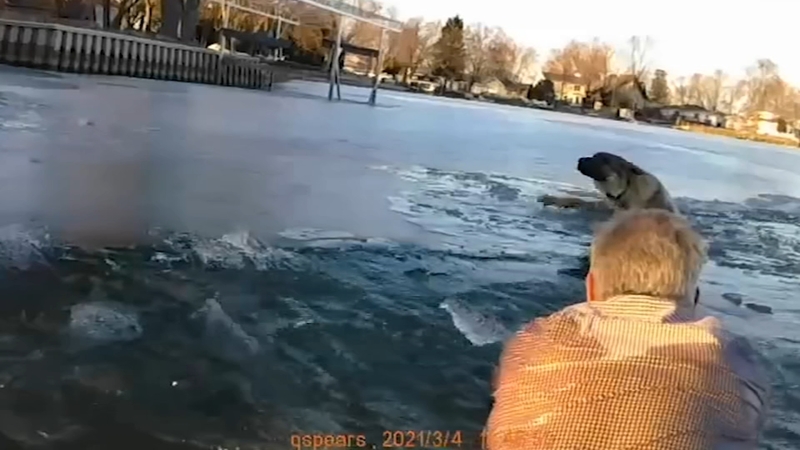 MANTENO, Ill. (WLS) -- Two Manteno police officers from the department's new marine unit sprang into action to save a dog that fell into an icy lake Thursday.

The call came in to the Manteno Police Department's new marine unit: "There's a big dog in the water about four houses down."

Officers Quincey Spears and Jessica Rourke responded to the call.

"When he was walking on the ice, he went into a spot where the sun was beating down on the ice, and it actually potentially melted that part of the ice, which the dog fell in," Officer Spears explained.

The officers quickly found a paddle boat and grabbed a pole to try to reach the dog, but they couldn't get to it alone.

"The citizens were willing to jump into the water just as much as us," said Officer Rourke. "There was a lady in a tank top and jeans that jumped in the ice cold water to help get this dog out."

"There was a male subject that lives in the area, he also jumped in the water right alongside me as I was on this paddleboat," Spears said.

Together, they were able to bring the dog to safety.

"I've seen some heroic things but that right there just took the cake for me yesterday, just seeing the citizens of Manteno just jump in without thinking about their own safety or anything of that nature to assist with the rescue of that dog, that says a lot about our community," Spears said.