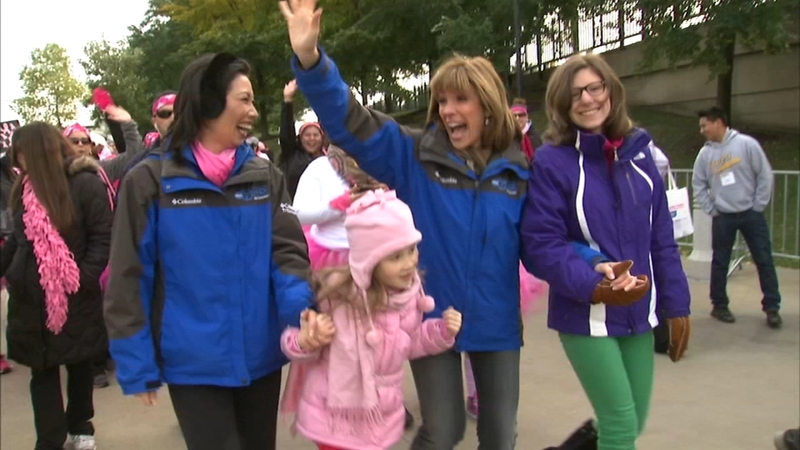 CHICAGO (WLS) -- You may be seeing some familiar faces in your local newspapers this month. It's part of a unique awareness campaign by the American Cancer Society and the University of Chicago Medicine, highlighting those who are touched by breast cancer. This team effort is making Chicago proud.

Tens of thousands of people across Chicago and the suburbs are once again gearing up for the annual Making Strides against Breast Cancer Walk.

A one-of-a-kind campaign called, "Pink: Powered by People," has been launched, highlighting seven pairings at the forefront of cancer care and research.

"It's the caregivers, husbands, care-treatment centers, physicians - all of those people - getting a voice," said Meg Fischer, of the American Cancer Society.

Dr. Jean Bao, a University of Chicago breast cancer surgeon, is one of those voices.

"Breast cancer is the No. 1 cancer diagnosed in females in the U.S.," Dr. Bao said. "So I think it's so important to raise awareness about breast cancer to promote appropriate breast cancer screening and to raise funding for breast cancer research."

Voices of survivors will also be heard, like that of Linda Harper Willaims. She was diagnosed after a routine mammogram. Months of chemo and radiation followed surgery for her.

"You become angry from being sick, can't eat. But I would just like to say it's worth every step, because it gave me life. I'm here. I'm cancer free," Williams said.

It is a collective call to action, kicked off with a photo of former Chicago Bear, Desmond Clark, and his daughters. He lost his mom to breast cancer.

"Breast cancer is so important to him. He was so impacted by his mom. He loved her so much. Now he's turning to his girls. He wants to make sure they're protected," Fischer said.

"I remember feeling such strength from that support. Now it's my opportunity to pay it forward, to give it back and to walk for others," Varon said.

You'll be seeing this campaign throughout the month of October in the Chicago Tribune and six suburban papers. Roz and Judy will be featured this Sunday.

The most important message is about early detection. For more information about screening for breast cancer, check out these online resources: