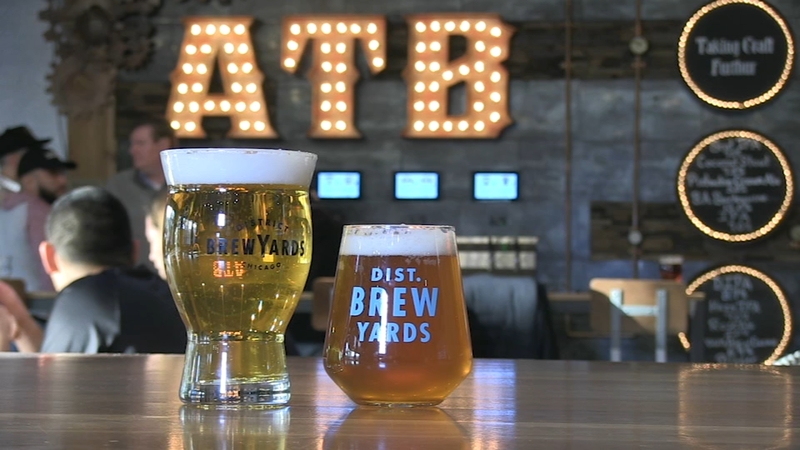 CHICAGO (WLS) -- A wave of new breweries has swept across Chicago in recent years, but our Hungry Hound says a new brewery in West Town actually has four different owners.

It's a pour-your-own style of brewpub, where guests decide exactly how much or how little they'd like to try. Plus, there's barbecue!

District Brew Yards in West Town houses four different breweries and provides beer drinkers with the opportunity to pour their own brews.

If, like me, you're undecided about which beers to try when faced with a long list of options, then District Brew Yards has the solution: you pour what you like, even if it's just an ounce or two, to get a taste. Are you into stouts? Hazy IPAs and cream ales? It's all here for you. Plus, to go along with your lagers and pale ales, some noteworthy barbecue, all smoked on the premises with appropriate sides to match. It all sounds like a good plan for a winter's night.

District Brew Yards has that raw, open, warehouse feel to it. People come here to drink beers after all. Located on a busy stretch of Ashland Avenue in West Town, the converted space is remarkable in that it's really multiple businesses, each with its own perspective on brewing.

"It's a collective brewery where we have four breweries operating under one roof, one facility. Burnt City, which we founded back in 2012; Around the Bend; Bold Dog Brewing; and our newest brewery, which is Casa Humilde That means 'humble house' in Spanish," owner Steve Soble said. "We have certain amounts of tanks that are allotted to each brewery every month, so they kind of know what brews are gonna fit into which tank and we kinda go from there."

This is a Pour Your Own brewery, which means a lot of freedom.

"This is a place where there's no judgement; no one gets between you and your beer," Soble said. "They swipe a credit card and tie it to a District Brew Yards card. And then you get any beer, any food, and they can go through any of the breweries, pour as little or as much as they want; they can create their own flight. They can talk to any of our beer guides who are stationed at each of our beer walls to help them make those decisions."

Options include hazy IPAs and something called a "Face Melter," made with hibiscus. Or you can enjoy a deep, dark stout to pair with the time of year; at Around the Bend, or ATB, they get really creative.

"What we like to do is take traditional styles and imbue them with an experimental edge. And that's where the name Around the Bend comes from. We feel like if you keep pushing boundaries, you never know what's around the bend," owner Dan Schedler said.

Two of their most popular choices are a pistachio cream ale called Vera, and the Silk Road, which is a pale ale utilizing galangal, a young Thai ginger. Casa Humilde makes artisan beers with a lower alcohol percentage, best suited to go with Mexican food; they'll even use prickly pears in their beer.

But the food served here is strictly barbecue, including slow-smoked brisket and tender pulled pork. Each side is also calibrated to go with the beer, think cheese-capped corn or brisket-studded baked beans.

"It's my favorite thing with beer, so that's why we chose that," Soble said.

For the brewers, having so much talent under one roof also helps them push their level of creativity, something that's already in abundance here.

"We get to share ideas and collaborate in a way that most breweries only get to do on a once, twice-a-year basis; we're doing it constantly and that's fantastic," Schedler said.