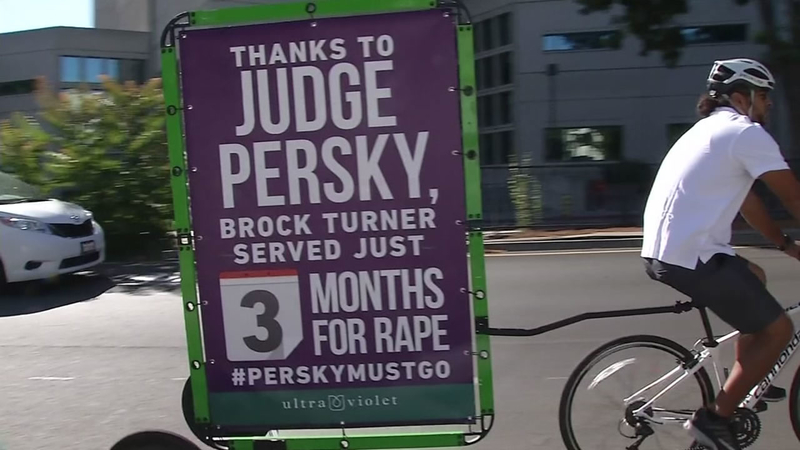 SAN JOSE Calif. -- In the short three months since Brock Turner walked in jail, the outrage over his sentence has put a huge spotlight on the judge in the case.

The release of Brock Turner gives an opportunity to critics of Judge Aaron Persky to advance their efforts to recall the Santa Clara County Superior Court judge and the sentence given to Turner.

A protest was held in San Jose, by people hoping to get Judge Aaron Persky pulled from the bench.

A rally across the street from the Hall of Justice and jail was heavily attended by elected officials. They joined a chorus of others seeking support for a petition drive to get a recall measure on the ballot in November of next year.

Persky is running unopposed for his judicial seat this November, so he will automatically stay on the bench.

Among the most passionate speakers at the rally were two college rape victims, who say they also saw light sentences given to their assailants.

"He is the reason why more victims don't report these crimes. Because if the police believe you, even if the prosecutors believes you, even if against the odds the jury believes you, at the end of the day, that can all be undermined by a judge like Aaron Persky, whose objectively is clouded by rape culture," said Kamilah Willingham, a sexual assault victim, who went to Harvard.

"Judge Persky's decision illustrates the severe lack of good judgemebnt or a moral compasss. And to me, that shows that he is unfit to severe on the bench," said State Senator Kevin De Leon (D), who is also California's senate pro tem.

The pressure on Judge Persky also includes some large bicycle billboards that will ride around the county Hall of Justice on Friday. Persky has been turning down interiew requests. he has shifted to an assignment as a civil case judge this wek, based here in san jose.

Chelsea was one of several women who went topless at Recall Judge Persky rally in #SanJose. #abc7now pic.twitter.com/FH0k4t9ZiR

Recall Judge Persky activists gathering for 10am event across from jail where #BrockTurner released. #abc7now pic.twitter.com/RyizRDgLJK