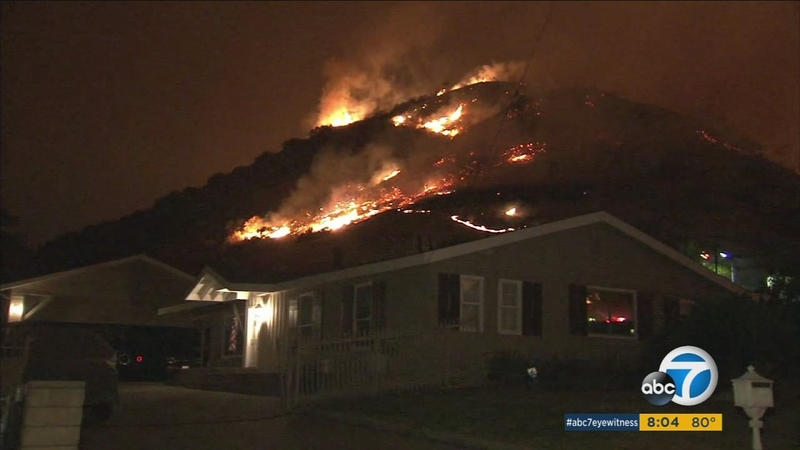 LOS ANGELES -- Homes in Burbank and Sunland-Tujunga, Calif. were evacuated as a brush fire grew to 5,000 acres, which Los Angeles Mayor Eric Garcetti said was the largest fire by acreage in his city's history.

The La Tuna Fire was 10 percent contained Saturday morning, according to the Los Angeles Fire Department. No injuries were reported.

The windswept blaze fire was burning in heavy hillside brush in the Sun Valley and Sunland-Tujunga areas. It began moving over the hills toward Burbank late Friday night.

Additional evacuation orders were also issued for the neighborhood of Lamer Street from Brace Canyon Road to Keystone Street and the Castleman Estates, Burbank police said.

Firefighters initially feared the flames would reach homes by midnight Friday. But the structure-protection efforts were able to hold off the flames for a time and as of 7 a.m. Saturday no homes had been damaged, officials said.

The 210 Freeway was closed in the area from the 2 to the 118 freeways, and remained closed on Saturday morning, fire officials said.

"Firefighters are battling not only 106-degree temperatures today with low relative humidity, but it's also very steep and rugged terrain," Los Angeles Fire Department Capt. Erik Scott said Friday. "Fortunately we have no injuries to firefighters."

In the Sunland-Tujunga area, homes on Reverie Road, Tranquil Drive, Inspiration Way, Hillhaven Avenue and Glen O Peace Parkway north of the 210 Freeway were evacuated as the fire continued to grow.

About 200 homes in that area were evacuated, officials said. Firefighters sent additional resources to that neighborhood for structure protection and to assist with evacuations.

The blaze was first reported around 1:30 p.m. in Sun Valley. Firefighters initially thought they had a good handle on the blaze. It only burned about a quarter acre of brush as it moved uphill.

The fire ignited amid triple-digit heat in the San Fernando Valley. Temperatures are expected to reach a high of 101 degrees in Sun Valley on Saturday, according to the National Weather Service.

The flames and smoke did not immediately affect flights out of Bob Hope Airport in Burbank.