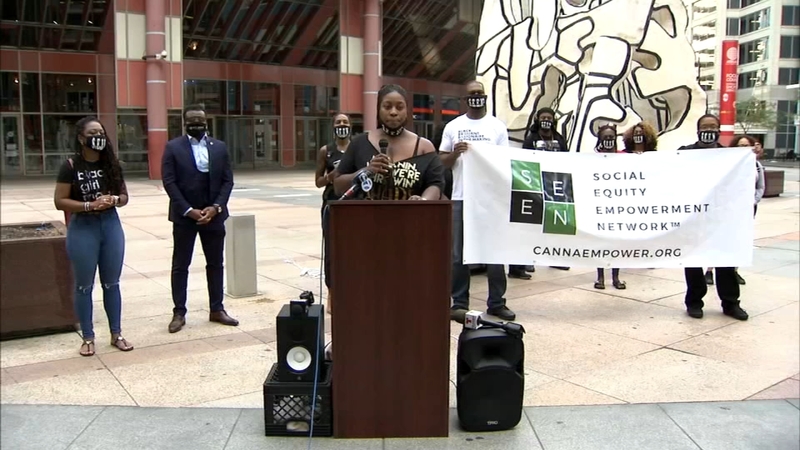 CHICAGO (WLS) -- Illinois' marijuana business is booming. The original intent of legalization was to spread the wealth specifically to minorities, who have been disproportionately affected by war on drugs.

But some applicants claim the state is not awarding enough marijuana dispensary licenses to minority owners. They're asking Governor JB Pritzker for transparency in how people are chosen.

"The spirit of the law is to repair those harms and create true equity within that demographic," said Belicia Royster, a social equity applicant.

But a group called the Social Equity Empowerment Network says the process to award 75 new licenses to operate dispensaries has not been equitable.

"We just want the playing field to be fair, that's all we wanted," social equity applicant Indrani Peyton said. "And based on how the outcome was - even part of the process - it was not, in fact, fair."

Peyton is part of a group that applied, but didn't make the cut. More than 700 groups submitted 4,000 applications. The state said 21 of these groups will advance to the next stage, a lottery to award 75 licenses.

"The facts show that of the 21 applicants, only 13 are owned and controlled by people of color," Royster said. "How is that maximizing social equity with these numbers?"

Royster said most of the winners are tied to big marijuana companies. Two have links to restaurateur Phil Stefani and former Chicago Police Supt. Terry Hillard.

Under the social equity rules, extra points are given for applicants who are majority-owned by a person living in an area affected by the drug war, someone with a marijuana-related arrest or a company that can employ 10 people who meet that criteria.

"All that chalks up to be is an employer, and to me, that does not balance the scales of social justice," Peyton said.

Some denied social equity applicants are not just speaking out, they are taking it a step further by filing federal lawsuits against the Pritzker administration.

Denied applicants want to delay the lottery until they get more transparency.