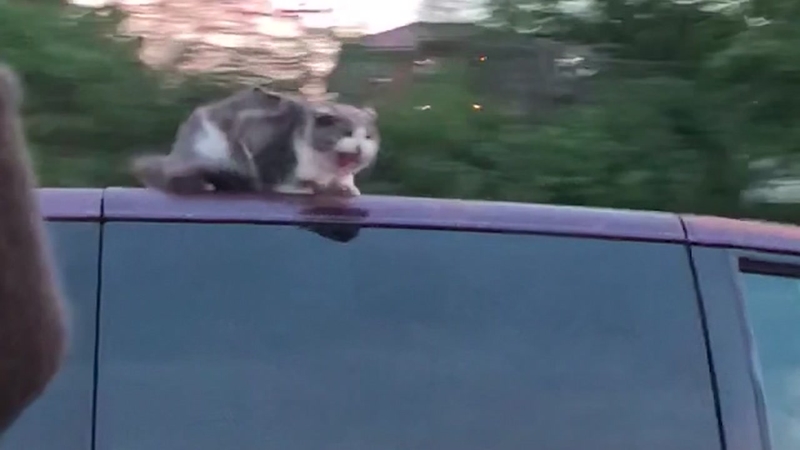 The family captured the bizarre scene around 8:30 p.m. Friday on Interstate 480 between Martha and Farnam Streets in Omaha.

You could call it "Feline on the Roof," but there's no 'kitten' around. The cat somehow clawed on to the van going 60 miles per hour.

"It looked really scared, like, 'What the heck is going on?'" Rankin shared.

So, Rankin had to let the cat out the bag:

"I said, 'There's a cat on your roof,' and I keep saying, 'A cat on your roof.' Then, she looks at me and she's like, 'Oh my God.' She looks startled, and so immediately, they slow down."

Rankin said she saw the van pull over before it was out of sight. The family hopes curiosity saved the cat.

"What happened? Is it their cat? Did it jump off? Were they able to get it?" asked Rankin.

The Nebraska Humane Society wants to know, too.

"We have never seen a video like that before," said Mark Langan of NHS.

Langan said although it may look like a wildcat, it's likely someone's pet.

KETV NewsWatch 7 asked Rankin if she believes cats have nine lives, in which Rankin responded with laughter: "I do now. I think this one does, hopefully."

The cat is gray and white and believed to be an adult.