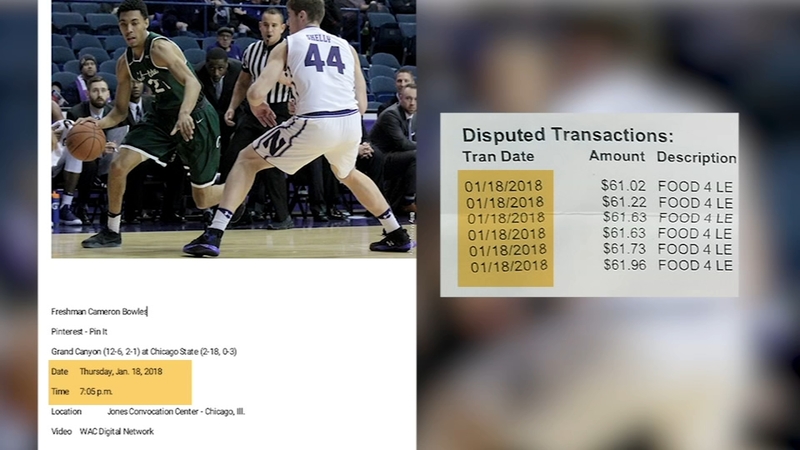 CHICAGO (WLS) -- Debit cards can easily be lost or compromised, and the next thing you know your checking account is drained.

One college basketball player says it happened to him but when he filed a fraud claim he was denied, so he called the I-Team.

Chicago State basketball player Cameron Bowles said he was playing basketball the day thieves were making their own moves with his Chase debit card, making fraudulent cash back transactions at a grocery store.

"And after seeing that, I'm like 'Really?' I'm on TV playing. It's just... I don't really know. It's just ridiculous," Bowles said.

There were more questionable ATM transactions on another day when he wasn't playing hoops. Bowles and his father showed the I-Team a Chicago police report they filed. The father and son said Chase has been rejecting their fraud claims.

"They don't believe me at all," Bowles said.

They're also disputing the deposit of what appears to be a fraudulent payroll check with a Kroger store logo. On it, Bowles' name is misspelled. He does not work for Kroger.

More than $500 was taken from Bowles' account, but he's on the hook for another $1,700 with Chase because the transactions resulted in an overdrafts.

Bowles said he called Chase when he realized he lost his card but said representatives told him that he must have given his PIN to someone.

"But my father doesn't even know my PIN number. So I wouldn't give it to anybody else. My father, my mother. Nobody knows my PIN number," Bowles said.

Bowles and his father believe the PIN was somehow compromised.

"It's affecting us because I know my child better than anybody. Myself, his mother - we know him better than anybody. The kid has never even had a detention. So this is totally out of his character, and I see the hurt and the pain on his face because it's like 'Man why am I getting accused of something I never did?'" John Bowles said.

John Bowles said they filed fraud reports, asked for video, gone to the police, filled out a police report, and are now talking on camera. He doesn't know what else they can do.

"At this point, I don't know. But if this was just something that was a couple of dollars, a couple of pennies, we wouldn't go this far. But I cannot let Chase or anybody else dishonor my son's name," he said.

They said they spent months trying to straighten out the issue before they reached out to the ABC7 I-Team.

The I-Team reached out to Chase. A spokesperson said: "As a courtesy, we have given Mr. Bowles a credit. As always, we encourage customers to contact us immediately if they lose their debit card or see any transactions they don't recognize on their account."

"it's never fun when you are wrongfully accused of something, especially when you are trying to convince the company you had nothing to do with it but it shows here- Jason Knowles and ABC7 News I-Team helped me get my money back, that I work so hard for and rightfully deserve, and I would just like to thank you guys from the bottom of my heart."

You can possibly avoid situations like this if you set up real-time text or call alerts with your bank. You can even set up alerts that will notify you if transactions go over a certain amount.

The sooner you report suspicious transactions the better.