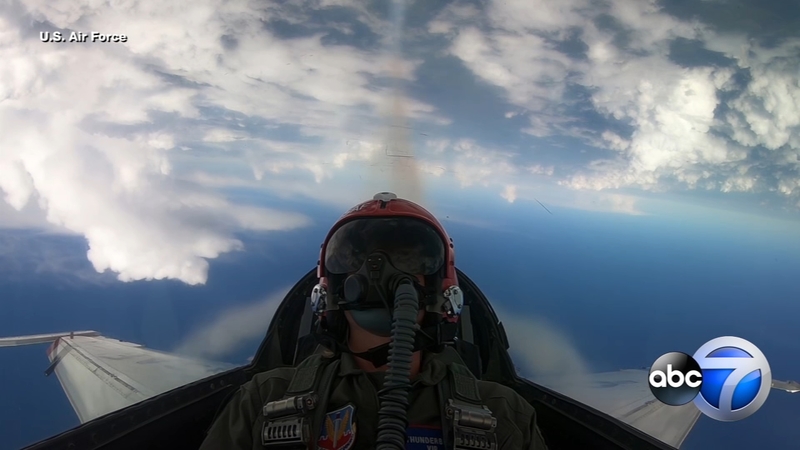 "It was incredible," said Grant after the flight out of Gary, Indiana. She added "there's no way that you can prepare for something like that so I didn't know how I would react. But I think I did pretty good."

She did well enough to have "pulled nine Gs" and even had the chance to fly the plane herself for a few minutes!

Kate Grant, a Chicago Park District special recreation coordinator, has been with the park for nearly 16 years and has a special connection to the Special Olympics - her uncle, Michael Cusack, is an original athlete from the 1968 games.

Grant is a coach for more than 15 Special Olympic sports -- a job she loves dearly.

"I definitely have received far more than I have given in this job," she said.

Her connection to the park district goes back to her childhood.

Her mother worked with the district in the Special Recreation Department and she now the special recreation coordinator at McGuane Park in the city's Bridgeport neighborhood.

This week, she will be honored for her dedication and passion as a Hometown Hero with a once-in-a-lifetime ride with the U.S. Air Force Thunderbirds on Thursday at the Gary Jet Center.
"Oh boy! I mean I'm not a bad flyer, I'm not afraid of heights, I like roller coasters so I think I'm a good candidate but I guess you're never know until you do it, so I'm excited," Grant said.

The honor is part of the Chicago air show's Hometown Hero Program, which is designed to highlight Chicagoans doing good things in their communities. Local heroes receive a one-hour Thunderbird orientation flight in one of the world's premiere fighter jets - the Lockheed Martin F-16D.

Grant said she sees this honor as a chance to set an example.

"I think a huge part of my job here is to encourage and coach people to try new things so I think it's my job now it's my turn to do something new so I'm just trying to show my athletes that I'm going to honor the Special Olympics oath and be brave in the attempt that it," Grant said. "Brave in the attempt, it's all I can do."
Report a correction or typo
Related topics:
societychicagogold coastlincoln parkherochicago air and water showspecial olympicschicago park districtairplane
Copyright © 2021 WLS-TV. All Rights Reserved.
RELATED
Air and Water Show Week
Warbird Heritage Foundation Museum features historic military planes
TOP STORIES
Scott Peterson resentenced to life for pregnant wife's murder
AL police investigating death of former NFL player, Chicago native
Gunmen on jet skis open fire into the air at beach near Cancun hotel
Man killed outside Chinatown school ID'd
Jussie Smollett charges go to jury as trial wraps up
Niles police release video of van involved in deadly hit-and-run
Omicron detected in Chicago as IL COVID hospitalizations surge
Show More
Lake Geneva Ice Castles' construction begins in Wisconsin
Chicago police have toolkit to prevent repeat chaos in the park
IL reports 6,658 new COVID cases, 14 deaths
Tiger Woods to make return from car crash at PNC Championship
Blackhawks' Khaira responsive after being stretchered off
More TOP STORIES News